Dissecting the Volte-Face in Middle Eastern Diplomacy from Islamic Perspective 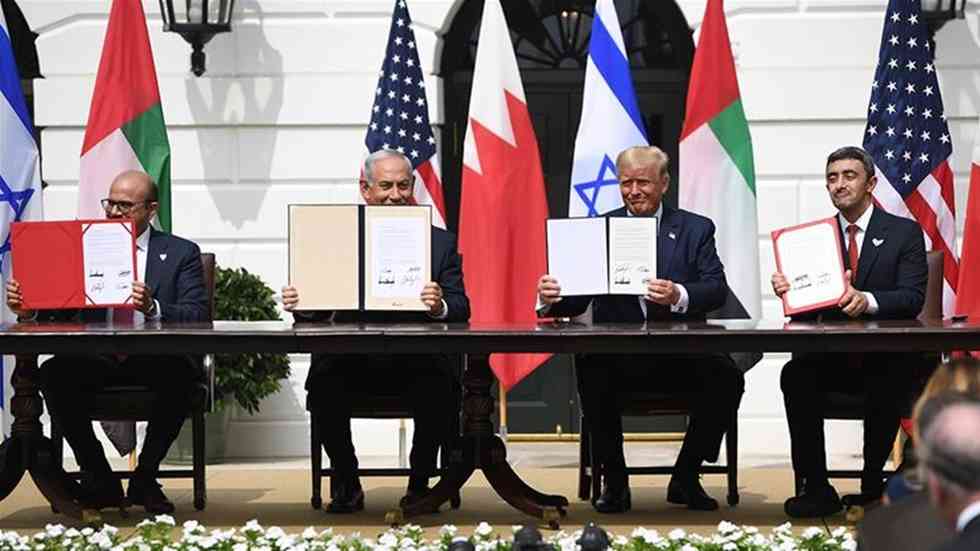 The recent flurry of Middle Eastern political activity in recognising the Zionist state of ‘Israel’ certainly shocked the global audience, who received this sudden ‘turn of the century’ with mixed response; some professing joy and happiness as a diplomatic victory for ‘Israel’ and her allies; and many others, especially the Muslim people, expressing their outrage, shock and disgust by the betrayal of Muslim leaders. Meanwhile, the scholars, analysts and academics scrambled to attempt at an interpretation of the volte-face which rocked the world, seeking an explanation behind what could only be described as a historical scenario unforeseen, and try to forecast what could be the repercussions of these diplomatic actions, which impacts both Middle Eastern policy and international diplomacy.

The recognition received by ‘Israel’ comes after painful negotiations between the countries of United Arab Emirates, Bahrain and the Jewish entity; with the United States under president Donald J. Trump acting as a broker; which resulted in a treaty between the three, falling short of a full peace treaty as Bahrain and the UAE had informal diplomatic relationships with ‘Israel’ in the years prior to this historic agreement. The agreement (for both Bahrain and UAE) were pretty brief, detailing only a formalisation of diplomatic relations and trade agreements, without much attention given to the regime’s treatment of Palestinians, only reserving a line for that matter. However, it makes one wonder, why the attention?

Both Bahrain and UAE are eager to protect their interests in the Gulf, which may be threatened by the actions of Iran as of late. It is only diplomatically logical for them to ally themselves with the illegal Jewish state, as Iran has long been an arch-nemesis to ‘Israel’. Furthermore, the United Arab Emirates are interested to invest in military and espionage technology produced by ‘Israel’, which without doubt ranks among the best produced in the world. Other than that, UAE also boasts of the agreement succeeding in ceasing annexation of Palestinian land in the West Bank, as announced by Netanyahu earlier this year; this, however, contradicted greatly with Netanyahu’s announcement on a Hebrew telecast which claimed that the agreement merely ‘suspended’ or ‘delayed’ the annexation.

Recent news reports also suggested that there may be Saudi Arabian recognition for the Jewish state. Following the much acclaimed meeting between US Secretary of State Mike Pompeo, Saudi Arabian Crown Prince Muhammad Bin Salman and Israeli Prime Minister Benjamin Netanyahu (a meeting most vehemently denied by the Saudi Arabian government) on the island of Neom, Saudi Arabia made the decision to open her airspace to any flights between UAE and ‘Israel’. Though such a gesture might be small, this signals a possible step to recognition on part of the Arab nations towards ‘Israel’. To date, there has been no developments, but more attention must be given towards Saudi Arabian policy in the Middle East with greater need.

From the Jewish regime’s perspective, the agreements had less to do with her survivability in the region but had more to do with its incumbent’s survivability; current prime minister Benjamin Netanyahu. A hard-line leader of the Likud party, Netanyahu has been one of the longest-serving prime minister of ‘Israel’, with 15 years of leadership under his belt. However, due to his mishandling of the pandemic in his own country, failing to contain the virus successfully, the people in ‘Israel’ are dissatisfied with his unfailing incompetence, and have taken to the streets to express their discontent. His increasingly desperate political maneuvers in controlling the domestic unrest is rapidly becoming superfluous, what more with the (currently) six corruption charges levelled against him, increasing public anger. It certainly reflects that these agreements are desperate acts of a desperate man to ensure his survivability.

The peace agreement not only could restore Netanyahu’s public image as of current state of affairs, the treaties also gave Netanyahu an edge in the coming elections, provided that the parliament agrees to dissolve. Netanyahu boasted that he is the first ‘Israeli’ incumbent to achieve regional recognition, without giving concessions to the Palestinians, long under regime’s brutal fist of oppression. Again, one must say, the treaties are less of a diplomatic move than a desperate political maneuvers.

The United States of America, having been the broker, celebrated this success; but when one observes carefully, one may see the agenda behind such a success is the same as the one Netanyahu faces. Beset by unrest and malcontent, Trump is as desperate as Netanyahu is in saving his face, and this agreement helped to boost Trump’s standing (but it did not affect the election results; in fact, Trump suffered a crushing defeat). However, it has been argued that the agreements are quite the presidential achievement, by stabilising the region and securing safe steps into wider recognition of ‘Israel’. President-elect Joe Biden also praised the attempt by Trump and hailed as a good move in Middle Eastern policy.

So far, no other nation has responded to the current state of events; and it includes other Gulf countries such as Qatar, Kuwait and Iraq. The rest of the world either remained oblivious of this news or are too focused on the pandemic that little attention was given to this regional development. However, as Muslims, what can we conclude from this?

This increasing recognition, which deceives Muslims generally and Palestinians specifically into believing that there is a glimmer of hope for peace and justice in the future, should not cloud our perception of the many instances of injustice the Jewish Zionist regime had committed. It has come to pass that ‘Israel’ has long oppressed the people of Palestine, and the agreements made with the Middle Eastern countries are not more than just a political tool for its incumbent’s survivability; its leader even so much as gloated that he could gain for ‘Israel’ widespread regional recognition without giving concessions to the Palestinians.

As for the leaders that signed these agreements, great shame have they caused to the Muslim world as they have; for not only have they decided to turn a blind eye towards the suffering of their brothers and sacrificed them for better economic and military gain. They have blatantly ignored what the Lord has expressly forbidden them; to take the Jews and the Christians as allies.

This is against what was mentioned by the Creator in His holy Book, which He decreed;

“O you who have believed, do not take the Jews and the Christians as allies. They are [in fact] allies of one another. And whoever is an ally to them among you – then indeed, he is [one] of them. Indeed, Allah guides not the wrongdoing people” [TMQ al-Maidah (5): 51].

By trying to appease the American superpower, the Muslim rulers have compromised with their faith. As the Muslim leaders embraced belligerent Jewish nation or Christian state as an ally (or allies), they have indeed breached their faith, and commit a sin. What makes this matter worse, is that they are ready to compromise their faith for mere economic gain and military advantage; which may suffice to last in this world but jeopardising their fate in the next. Thus, is a Muslim’s perspective of the recent recognition of ‘Israel’, none other.