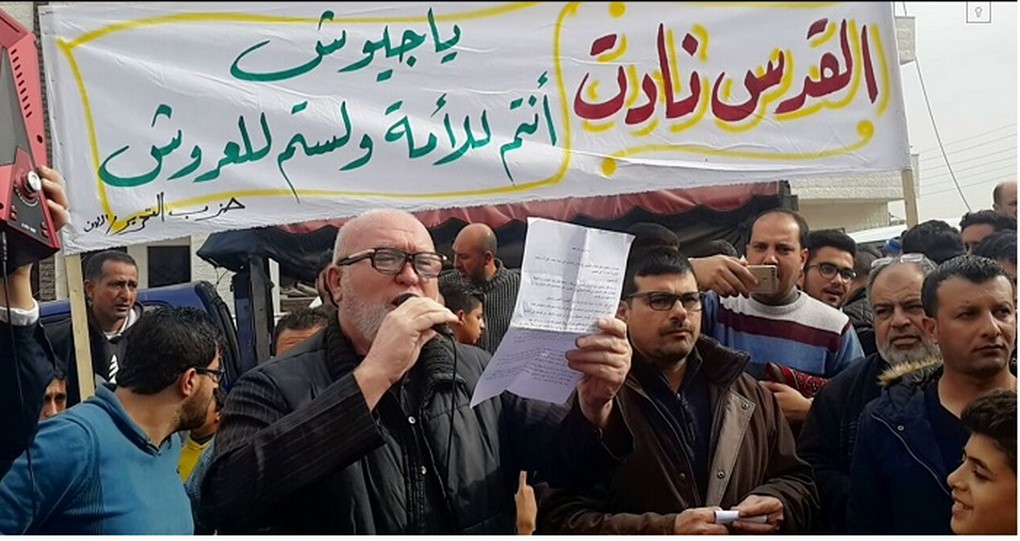 The Jordanian government has shown its exhilaration with the United Nations General Assembly resolution rejecting America’s official recognition of Al-Quds (Jerusalem) as the capital of the Jewish entity. Several media outlets have reported that the Jordanian Government welcomed the resolution, through its State Minister for Media Affairs, the government’s spokesperson, Mohammad Al Momani, who considered the new General Assembly’s resolution as reflecting the international community’s determination to ensure the illegality of any measure that targets the status quo of the Holy City or changes new facts in it. He stressed that the international law considers East Jerusalem an occupied territory and that the achievement of a comprehensive peace is conditional on East Jerusalem being the capital of the Palestinian state within the 4th June 1967 borders, pointing out that peace is a strategic Arab choice, which all Arab countries had declared their adherence to.

We in Hizb ut Tahrir Wilayah Jordan, in the context of the statements made by the official spokesman of the Jordanian government and its exhilaration and welcome of this resolution, we confirm and state the following:

Firstly – The international legitimacy, that is upheld and praised by the official spokesman for the government of the Jordanian regime does not mean anything to the Muslims. It is the law of the forces of Kufr, tyranny and colonization, above all, the holders of which had congregated in 1924 to destroy the legitimate political entity of the Muslims (the Caliphate “Khilafah” state), and it distanced Islam from the international arena.

Secondly – The United Nations Organization, with all its organs, institutions and councils, is a Kaffir colonialist organization that has no value, no weight and no regard to the Muslims, and so is any resolution issued by it or by any of its institutions and councils. It is which have recognized the right of the Jewish entity to exist on the land of Islam; the Blessed Land of Palestine, by the resolution of the partition of Palestine; and as such have recognized the states that it had established on the ruins of the Ottoman Caliphate after it divided and colonized the Muslim countries, and afterwards it fragmented and defeated the Muslim peoples.

Thirdly – The United Nations General Assembly resolution is not a victory for Al-Quds, nor has it ever been in the interest of the Muslims, rather it is a continuation of the affirmation of the right for existence of the Jewish entity over the Blessed Land of Palestine and a consolidation of usurping Al-Quds by the Jews.

Fourthly – the whole of Palestine and the whole of Al-Quds, its east and west, its north and south, is an Islamic land that belongs to the Muslims, and no one has the right to give up one inch of it…

Fifthly – the insistence of the Muslims rulers, Arabs and non-Arabs, to renounce the lands of Palestine that are usurped by Jews, and to abandon the greater part of Al-Quds, which they expressed (the resolutions and the concessions) by affirming their support for United Nations resolutions that entrench the usurping of Palestine by the Jews, and by their demand that they resolve the issue based on the two-state solution, in view of West Jerusalem as the capital of the Jewish entity and its eastern as the capital of Palestine, and with their commitment to the Arab peace initiative and their collective decisions issued by the Arab League and the Organization of Islamic Cooperation. This insistence confirms their complicity and conspiracy with the colonial powers and their betrayal of Allah, His Messenger and the believers.

“O you who believe! Betray not Allah and His messenger, nor knowingly betray your trusts” [Al-ِAnfal: 27].

Sixth – The decisions and the concessions of the Muslims rulers about any inch of Palestine or the city of Al-Quds is binding nothing on the Muslims except the hard diligent work to end the series of betrayal of Allah, His Messenger and the believers and to stop conspiracy on Islam and Muslims and their country and sanctities; through ridding the Islamic Ummah of its rulers and the establishment of the Khilafah (Caliphate) state on the method of the Prophethood on the ruins of their worn-out, helpless, surrendering, submissive and subordinate regimes, the puppet of the Kaffir West.

Seventh – Although the regime in Jordan is aware that targeting its existence and persistence is one of the most important goals of the American decision to recognize Al-Quds as the capital of the Jewish entity instead of resisting America by rising to the apex, through adopting the whole system of Islam and implementing its provisions, ending dependence on the West, and abolishing the Treaty of Wadi Araba and all what was built on it and returning to the state of war with the Jewish entity. This regime, which took its men and cabinet ministers down to the streets, and its government was the first to call for demonstrations and to rally masses in the streets and fields under the title of defending Al-Quds and rejecting the decision of the enemy of Islam and Muslims, America, to recognize Al-Quds as the capital of the Jewish entity, we find it, through the statements of its Government’s spokesperson, Mohammed  Al Momani, confirms its persistence and insistence on recognizing the right for the existence of the Jewish entity on what it usurped from the land of Palestine and on the greater part of the city of Al-Quds (West Jerusalem). And renews its commitment to the Arab peace initiative and its support for the resolutions of the United Nations, which are in fact the stabilization of the Jewish entity and the recognition of the greater part of Al-Quds as its capital, so, what type of incoherence and deception is that?! What a loss? And what blinding is this about the correct legal procedure in the legitimate response to the Jewish entity and the decision of the reckless, imprudent American president, Trump?!

The hope lies in your armies, the armies of this Ummah, to take its sincere choice, which has been reverberated by it from Indonesia to Morocco, and is contrary to the choice of their regimes which are surrendering to their enemies; to practically move to restore Al-Quds and Palestine, the whole of Palestine. They know that this is possible if they exceed the deficit of their Rulers who prevent them from eliminating the Jewish entity, rather eliminating the influence of the entire West from our country and the removal of the authority of the Ummah from its usurpers and returning it to the Ummah, which longs for it to declare the second Khilafah Rashidah (righteous Caliphate) State on the method of the Prophethood.