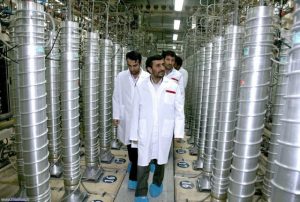 Question: What events resulted in Iran agreeing to enriching (Uranium) outside its territories in Turkey and to sign an agreement to that effect with Brazil and Turkey?

Answer: Oflate European pressure has mounted to impose strict sanctions against Iran because of its nuclear programme, and these pressures have only intensified after the formation of the new government in Britain which has threatened military action. Off course the British government alone is not in such a position and so it aims to spur the US and thus raise the intensity of the Iran issue. The British Foreign Secretary William Hague, in hirst first external trip as minister visited the US just three days after assuming charge as foreign secretary where he stressed that as Brtish foreign secretary, he chose to first visit the US to underline the special relation with America. [Al-Sharq al-Awsat: 15.05.2010]. This was a reference to an earlier report issued by a group of members of the British House of Commons about the special relationship between them. Thus William Hague emphasised the importance of this relationship and Britain need for it.

William Hague promised to pressurise Iran and expressing his agreement with the US position, he said: “ His government will work to convince the European Union to adopt resolutions and strong measures against Iran.” He added: “We are in agreement on the need for sending a strong and unified message regarding Iran’s nuclear programme, and pass UN Security Council resolution to that effect. After this the United Kingdom will play a fundamental role to ensure that the EU moves firmly to follow up on such a resolution.” [Al-Sharq al-Awsat: 15.05.2010]. He demanded intensifying of sanctions against Iran as a first step leading towards achieving global legitimacy for eventual military action, he said: “Though we have not ruled out military action in future, but we do not call for it.” [Al-Sharq al-Awsat: 15.05.2010]. This is merely a negotiating pressure alone on Iran, rather it reflects the British position and it was evident during the riots that followed the presidential elections in Iran that Britain was trying to destabilise and eliminate the Iranian regime. Britain is now trying to build European consensus in cooperation with France and Germany and bring pressure upon Iran, and not to speak of the ‘Israeli’ pressure in this regard. It so happened that America reached an agreement with Iran and dispatched the president of Brazil and the prime minister of Turkey to Iran to sign a Uranium exchange pact in order to reduce the impact of threats and sanctions card that was being raised by Europe, and especially by Britain, followed by France and ‘Israel’. Thus Iran signed the latest agreement with Brazil and Turkey which includes clauses that Iran agreed to send 1200 Kgs of 5.30% low-enriched Uranium to Turkey in exchange for 120 Kgs of 20% enriched Uranium which was required for peaceful nuclear reactor located in Tehran. The essence of this agreement may have been proposed by the International Atomic Energy Agency (IAEA) as a way out of the deadlock in the negotiations between Iran and the five permanent members of the UNSC and Germany about a year back which then failed due to the issue of guarantees and trust.

Two new major clauses have meanwhile been added to this agreement regarding the issue of guarantees and trust, these are:

1: That the enrichment process will be carried out in Turkey (as a compromised place).

2: In case the negotiations concerning the copmpliance of this agreement with the Vienna group consisting of the US, France and the IAEA fail, then Turkey will be bound to return the Iranian low enriched Uranium meant for enrichment back to Iran.

Examining this agreement closely, we find that it was the US that encouraged Brazil and Turkey under its patronage. The French website (france24.com/) reported: “The United States, Russia and France encouraged Brazilain President Lula’s official visit to Tehran and considered it as the last chance to avod sanctions.” An Egyptian newspaper reported this news on 18th May, 2010 from an undisclosed source.

The story of this agreement began with the dinner invitation by the Iranian Foreign Minister Manoucher Mottaki to all the 15 members of the United Nations Security Council including the five big powers along with Turkey and Brazil who are non-permanent members of the UNSC. This dinner was on the sidelines of the follo up conference on nuclear non-proliferation.

This dinner was attended was Amercia’s deputy ambassador to the UN Alejandro Wolff and ambassadors or lower ranks representatives of all the 15 member nations.

New agencies quoted a US official saying before the dinner began: “The United States considers this dinner as a new opportunity for Iran to convince the Security Council that it is capable of compliying with its requirements.”

The passing of this resolution means saving Iran and that too in the last minute from sanctions that were otherwise certain to come, sanctions that were drafted by Europe along with the US, China, Russia and Germany. This opportunity allows Iran a minimum period of another three months before the sanctions become effective in case of any future disagreement.

There is no doubt that the conduct of Brazil and Turkey was at US behest because Brazil, which is the 8th largets economic power in the world, needs America to continue its economic growth, and it was just one month back that it signed a military pact with the US.

As for Turkey, its Prime Minister Erdogan clearly stated that on the issue of implementing the clauses of the agreement, he will coordinate with America directly. He later stated that whatever was achieved was through coordination with Washington…, a similar statement also came from Brazil!

United States reliance upon Brazil and Turkey in its time of need and will help it to evade sanctions against Iran which are being imposed at the behest Europe and the Jewish state. On the other hand, this means that America is taking advantage of the non-permanent members of the UNSC at the cost of the permanent members.

In conclusion it can be said that the entry of Turkey and Brazil as new parties in the Irani nuclear issue helps America to obviate any damage the propsed severe sanctions against Iran, because the entry of Brazil and Turkey in signing the agreement means a clear cracking of the so-called global community’s effort against Iran on this issue.

Further, this agreement forges a general demand for negotiations on its implementation, and this gives Iran a breather from the pressures being mounted by the international community, especially Europe. Irrespective of whether this is implemented immediately or is delayed, the intensity of pressures on Iran is certainly weakened gradually. Similarly the US’s embarrassment at the hands of Europe and the Jewish state who have been making attempts to make America take military action or atleast place effective sanctions has subsided.