The Leaders of the Factions are Manipulating the People of Lebanon during the Presidential Elections While they have no say in the Matter Apart from Implementing what is Dictated to them from America! 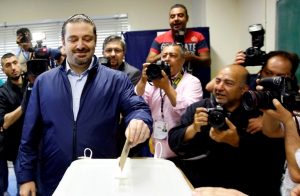 The political class does not hesitate to implement the broad foreign agenda and the American agenda in particular. Since the visit of the US Under-Secretary for Political Affairs, Thomas Shannon Jr, to Lebanon at the beginning of last September, there have been a series of events within the country. Moving from Twitter to the dialogue table, to an extension for the Army head and it appears that the announcement of Saad Al-Hariri, who has appointed himself to be the guardian of the Muslim majority (whilst he is not), putting forward Aoun (as the presidential nominee), won’t be the last in these series of events!!! And then there was the following storm brought about by his supporters between those for and those against, as if anyone of them was the one who possessed the right to make the final decision in respect to the matter of Lebanon!!

However many nominees are nominated and despite the uproar, the matter of the Presidential election rests in America’s hand alone. It is to ensure their interests, particularly in respect to Syria and Kerry’s twisted statement will never change that when he said: “We hope. For sure, that development takes place in Lebanon, however I am not sure of the result of the support of Saad Al-Hariri, I just don’t know” (Al-Jumhuriyah Newspaper 21/10/2016). That is because there is no doubt that he knows what two hands have woven… So if America permitted, the parliamentarians would have attended, completed the appointment and elected the president… And if it had not permitted, then this one would have attended and that one would have been absent and the appointment would not have been completed. They would then return covering their failure by blaming one another without anyone of them daring, not even by implication, to blame that state which possesses the real decision!

Every aware politician knows that the subject of electing the president in Lebanon does not take place as the result of an internal decision as is being marketed or imagined by some. Rather, that decision comes from America that has set its grip firmly and decisively upon the effective state apparatus and branches. That is either via its local delegated agents like Iran and Saudi or in a direct form where even the interference of its embassy has become blatant. Indeed, the American diplomatic chief in respect to Lebanon makes statements as if Lebanon is one of America’s states!! It has even reached the point where both America’s state competitors in Lebanon (France and Britain) and their subordinates in turn, have become rusty and lost their effectiveness or impact…

The above relates to the Lebanon situation connected to the regional situation. As for you O Muslims: Does not that which those who claim to represent you, Al-Hariri and his faction, undertake, represent a squandering of your strength and does it not make of you mere followers having no capability or power of your own except to nominate Aoun, Samir Frangieh and others like them!!!

The one who claims that he is strong by you, possesses his own will and actually realises that you are part of an Ummah,  would toss aside this ruinous political form represented in the division of authority in this manner. He would consequently not nominate someone who is not from amongst you in compliance to understandings and agreements that do not represent other than the interests of the disbeliever colonialist west. Indeed, above and beyond that this man (Hariri) is nominating someone who harbours hostility towards Islam and its adherents! Aoun, who shared and assisted in igniting the concept of the minority and the majority in the land of the Muslims. That was when he invited the heads of the Eastern churches to meet in Lebanon in order to make the issue of religious minorities prominent and out of fear of the rule of the majority under the Islamic state which they fear will be established soon. He intends to make minorities the main weapon to preserve the western colonialist hegemony and dominance…

We have also not forgotten Michel Aoun’s description mentioned in a document published by the Jumhuriyah Newspaper in 2014 from the speech of the Information Minister Charles Rizk to Ambassador Jeffrey Feltman, in which he attributed to Michel Aoun the description of a wide section of the Muslims as being “animals” and “extremists”. So, in light of this, how can someone, claiming himself to be a leader, Saad Al-Hariri, nominate someone who has insulted him personally and insulted those whom he is claiming to represent, with such disgraceful and immoral expressions!!!

Lebanon is a meagre and weak entity and Lebanon’s problem is represented in its political set-up, from its separation from what surrounds it and the subservience of its rulers to the Kaffir colonialist. So do not be deceived by slogans such as “Freedom”, “Independence” and “Lebanon’s interest”. That is because the subservience of the leaders of the factions makes it inevitable for them to stomp over the public opinion when it is in opposition to the stance of their foreign masters. Their concern alone is their interests, the continuation of their situation and the situation of the country as it is… If you have seen from them what is thought to be a form of caretaking for you, then the true reality is that it is only a caretaking for themselves. That is because Lebanon has become for all of the current political leaders, without exception, a field from which profits can be accumulated through evil means, whilst forgetting or being made to forget that all of this corruption and causing of corruption will lead them to inherit disgrace in the life of this world and the severest punishment in the Hereafter.

“Be not deceived by the [uninhibited] movement of the disbelievers throughout the land. [It is but] a small enjoyment; then their [final] refuge is Hell, and wretched is the resting place.” [Aali ‘Imraan: 196-197]