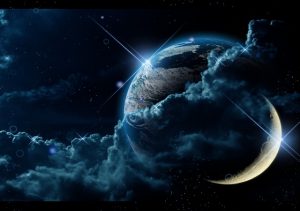 A short number of days separate the Islamic Ummah in the East and West of the earth from the blessed month of Ramadan, the month of abundant goodness, mercy, forgiveness and the redemption from the fire. So all praise belongs to Allah who has favoured us with virtuous month. This month in which the Ummah as a whole still yearns for the day of its fasting and the day of its Eid to be unified in an actual manifestation of the manifestations of Islamic unity. However for many years, Muslims have been deprived of this goodness due to the domination of the tyrannical rulers who have consecrated division amongst the Muslims which includes their fasting and their Eids. They made the new moon subservient to the political borders that the disbelievers drew between the Muslims whilst the Scholars under those in authority have permitted that or remained silent over it.

The Muslims in the time of the Messenger of Allah ﷺ and the rightly guided Khulafaa’ used to fast and break their fast on a single day in compliance to the command of Allah and the Sunnah of His Messenger. Since the Speech of Allah Ta’Aalaa made the fasting of the month of Ramadan obligatory:

The Messenger of Allah ﷺ came with the explanation of the practical application of how to comply to this command covering all of its aspects. This includes the subject related to the beginning of the month of Ramadan. He ﷺ said:

In this Hadeeth and those which are similar to it, the Messenger of Allah ﷺ commands the Muslims as a whole to fast the month of Ramadan upon the sighting of the moon. The wording of the Ahadeeth have come in a general form because the pronoun of the plural in «صوموا … وأفطروا» “Sumoo (fast)… wa Iftaroo (break the fast)” indicate the generality of the Muslims. The same applies to the wording«رؤيته»  “Ru’yatihi (Its sighting)” as it is an ‘Ism Jins’ (noun of a particular kind) which is added to the pronoun indicating generality.

The honourable Sunnah explained that it is not required for every Muslim to see the new moon himself for him to begin fasting. Rather the sighting of one single Muslim is sufficient for all of the Muslims. It has been related from Ibn ‘Abbas (ra) that he said:

فَقَالَ: «أَتَشْهَدُ أَنْ لَا إِلَهَ إِلَّا اللَّهُ؟» قَالَ: نَعَمْ، قَالَ: «أَتَشْهَدُ أَنَّ مُحَمَّدًا رَسُولُ اللَّهِ؟» قَالَ: نَعَمْ، قَالَ: «يَا بِلَالُ أَذِّنْ فِي النَّاسِ أَنْ يَصُومُوا غَدًا» An Arab Bedouin came to the Prophet ﷺ and said: I saw the new moon (meaning the new moon of Ramadan). And so he ﷺ said: “Do you testify that there is no God but Allah?”. So he replied: Yes. And (so) he ﷺ said: “Do you testify that Muhammad is the Messenger of Allah?”. He replied: Yes. So he ﷺ said: “O Bilal, make the Adhaan amongst the people to inform them that they are fasting tomorrow” (Al-Hakim). The Noble Sunnah then came to explain that the sighting of the Muslims in any land is binding upon the Muslims of the other lands. That is because no Muslim is or greater standing than another Muslim and no land is of greater standing than another land. It was related from a group from the Ansar:

“The new moon of Shawwal was clouded over (obscured) for us and so we arose in the morning fasting. Then riders came at the end of the day and testified before the Prophet ﷺ that they had seen the new moon yesterday. And so the Messenger of Allah ﷺ commanded them to break their fast and for them to go out for their Eid tomorrow” (Ahmad).

Therefore, the Messenger of Allah ﷺ found the testimony of those Muslims, who had come to Al-Madinah from another land, sufficient, without asking them anything else about it. And he commanded the people of Al-Madinah to take the sighting of their brothers. Through this Noble Sunnah the Messenger of Allah ﷺ explained this matter to us. Consequently, the fasting of Ramadan is Fardh (obligation) upon all of the Muslims and they commence their fasting by the affirmation of the sighting of the new moon of the month of Ramadan and even if this affirmation came from one single Muslim and from any land, as long as that sighting was in accordance to the Shar’iah conditions and restrictions. This was the opinion of the majority of the ‘Ulemaa of the Muslims and of all of the Islamic Madhahib (schools of thought) from the time of the Messenger of Allah ﷺ until our current day.

Some of the Fuqahaa’ adopted the opinion that states that the different locations of (the moon) rising are to be taken into account. They relied upon what was related from Kuraib: “That Umm Al-Fadl sent him to Mu’awiyah in Ash-Shaam and so he said: I arrived in Ash-Shaam and fulfilled the tasks (required of me) and then Ramadan began whilst I was in Ash-Shaam. I saw the new moon on the night of Jumu’ah. Then I arrived in Al-Madinah towards the end of the month. Then Abdullah Ibn ‘Abbas queried me when mentioning the new moon and said: ‘When did you see the new moon?’ So I said that we saw it on the night of Jumu’ah. He then asked: ‘Did you see it yourself?’ So I replied: ‘Yes, and the people saw it and they fasted and Mu’awiyah fasted. Then he said: “We however saw it on the night of As-Sabt (the eve of Saturday) and we will continue to complete 30 unless we see it (i.e. the new moon of Shawwal). So I said: Is the sighting of Mu’awiyah and his fasting not sufficient for you? And so he said: No, this is how the Messenger of Allah commanded us” (An-Nisaa’i). The majority of the ‘Ulemaa have responded to this by explaining that this opinion represented the Ijtihaad of Ibn ‘Abbas (ra) whilst it is known that the Ijtihaad does not specify the generalities of the Qur’an and the Sunnah, in addition to this Ijtihaad being contrary to the generalities of the evidences that we have already mentioned, including the Messenger of Allah ﷺ adopting the sighting of the travellers who came to Al-Madinah from away. Many differences stand out amongst those who put forward this view in respect to specifying the locations of the sighting and the distances between them. If an excuse can be found for those who hold the view of different sighting locations whether this is as a result of Taqleed (imitation) to the opinion of Ibn ‘Abbas (ra) or from the angle of the difficulty of ascertaining the reality of the Hukm in our current time, or the difficulty of communications between the different regions at that time, it is nevertheless not permissible at all to use that Fiqhi opinion to tie the sighting of the moon to the political borders that the disbelievers have drawn between the Muslims today.

The considered sighting is the one that is done by visual sight whilst no consideration is given to astronomical calculations if the sighting is not affirmed by the eye. That is in the case where there is no Shar’iah value in astronomical calculations in respect to affirming the fasting and the breaking of the fast. And that is because the Shar’i Sabab (cause) for the fasting or the breaking of the fast is the sighting of the new moon by the naked eye due to his statement ﷺ:«إذا رأيتموه فصوموا، وإذا رأيتموه فأفطروا، فإن غُمَّ عليكم فاقدروا له» “When you have sighted it fast, and when you have sighted it, break the fast. And if it is clouded over (and obscured) from you then calculate for that” (Bukhari). And the statement: «فإن غُمَّ عليكم» “If it is obscured from you” means that it is covered or something other than that which has prevented you from seeing it with your eyes. As for the statement: «فاقدروا له» “Then calculate for that” then this does not mean resorting and referring back to the astronomical calculations but rather it means that which the Messenger of Allah ﷺ explained when he said:«فإن غُمَّ عليكم فأكملوا العدّة ثلاثين» “And if it is clouded over (i.e. your sight of new moon is obscured) then complete the period of 30 days” (Bukhari).

Verily, the unity upon the day of fasting will not happen unless the Islamic lands are unified through the establishment of the rightly guided Khilafah state (Caliphate) upon the methodology of the Prophethood which will bring together the unity of the Muslims an apply the symbols of Islam as Allah سبحانه وتعالى has commanded and not in accordance to the whims of the rulers.

We ask Allah Almighty to accept our acts of obedience and to remove the suffering of the Muslims in general and the suffering of the people of Ash-Shaam in particular and to make this month, a month of victory for the Ummah, through the establishment of the Shar’iah of Allah and the realisation of the glad tidings of the Messenger of Allah ﷺ with the return of the rightly guided Khilafah (Caliphate) upon the methodology of the Prophethood, and to grant honour to Islam and the Muslims.

May every year find you in goodness.