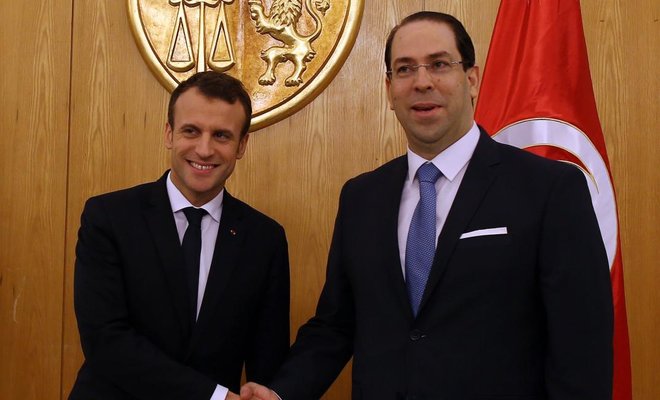 To express its rejection to the French president’s visit to Tunisia, Hizb ut Tahrir/ Wilayah of Tunisia organised on Thursday morning 01/02/2018 a picket in front of the Parliament of Bardo. A delegation of the party’s members handed a letter to the members of Parliament entitled “An urgent letter from Hizb ut Tahrir / Wilayah of Tunisia to the Parliament:” Macron “is an invading colonizer. His visit is unacceptable. The Tunisians do not accept the submissiveness and subordination and humiliation displayed by the” rulers ” to the colonists.

Hizb ut Tahrir also confirmed in this letter that France was and still is a colonial state. “It has killed our sons, desecrated our sanctities, plundered our wealth and continues to treat the rulers of their colonies with contempt and humiliation”.

The party also stressed that there is no “friendly” relationship between Tunisia and France, and that what is discussed regarding the investments and partnership agreements is a new form of colonial domination aimed at continuing to loot natural resources, exploit cheap labour and keep Tunisia a market for European goods and services.

Hizb ut Tahrir concluded its message by emphasizing that the solution is not to fall into the arms of the colonizer, but to liberate the country from all colonial ties and to rely on the system of Islam that will be implemented by the Righteous Khilafah state (Caliphate) on the method of Prophethood to regain its dignity and glory prior to restoring its wealth.