Landfills of Death in Tripoli!!! 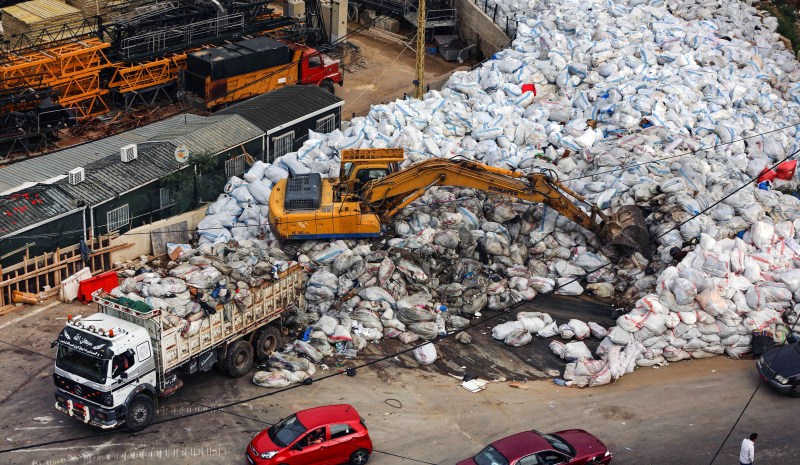 The Lebanese state, represented by the Environment Minister Fadi Jreissati, and even its deputies, all its deputies, still show the depth of their disregard for the people and their demands! The state uses the most backward methods in dealing with waste and landfills, without regard to the areas and its people, nor show any concern for the health of the people, trying to impose it on the city of Tripoli and its environs, starting from the Fawwar area, and not stopping in the area of ​​Terbol – from what can be seen by the state’s behaviour – which delivers waste from the areas, to be thrown on the shoulders of the people of Tripoli, spoiling their air, water and greenery, in a clear discretion between the regions, and reached the health of people, and their social security!

These landfills, especially the landfill of Terbol, will be one of the most dangerous landfills in Lebanon because it is the highest. Therefore, this landfill will spread its contaminated secretions in the groundwater of Minieh, Beddawi, Meriata, Markabta, Helan and Deir Ammar, to reach Tripoli, passing all the towns and villages in this geographical spot, in addition to the air pollution that will prevail in the area, due to the high landfill and exposure to air currents passing through the villages and towns, in particular, since this landfill will be the largest in Lebanon, because it will collect the waste of five districts with a high population density.

In this regard, we in Hizb ut Tahrir / Wilayah of Lebanon, we address these words to:

The Lebanese state, represented by its ministries, and all its ministers without exception, starting with the Minister of Environment, that we will not stop repelling this attack on our areas, and we will stand as a wall against all attempts to kill us, and kill our children, through these landfills, which take only regionalism into account, and under the table deals… Then the Minister of Defense, and the Minister of the Interior, who put the services of the army and the gendarmerie in the face of people’s demands and objections, reducing the role of the army and the gendarmerie! And turning them away from their direction! Until it came to assaulting women by beating, by the gendarmes, and all the crime of the woman who was beaten, is that she raised her voice loud in the face of the death step taken by the Authority, which will not stop at where those living in the area now, but will reach their children and their children’s children!!

And to the deputies, including the MPs of Tripoli, who were elected by the people to represent their interests, we did not hear from them but whispers after the news came out that all deputies agree, and knew in advance about these landfills!! We tell them with all their stripes: There is no excuse for you, and your permanent presence among the people who brought you to power is required, and standing in the first rows is the duty, without compromises and delays… As for the pretext that these areas where the landfills will be placed is neither administrative nor elective to the city of Tripoli, is flimsy and fallen pretext. Does the wind that will carry poisons to Tripoli, and does the groundwater that will be contaminated with landfills; know your administrative and electoral boundaries?!

To the security forces in all their formations, the Authority wanted to put you in the face of the people affected in their health and the health of their children, how can you accept that?! And you are the sons of these areas and its people, isn’t what is happening to the people of these areas, is happening to you and your family?! Aren’t you of these people, who stand to preserve themselves and their children, and you are from these sons?! How can this authority bring you to this bottom of dealing, to be guards on the piles of waste?! إou did not work or join these devices for this! But rather to protect the people and their lives and their honour and remove all harm from them … So stand with the people in their rightful demands.

O people, know that what you have done is at the heart of your Deen. It is an important pillar of Islam’s view point about life; which is protecting the environment and health care, and protecting them from pollution and pests. It is the duty of the states that cares for its people and not to collect (tax) and loot their pockets, this will be soon, Allah willing, in the Khilafah Rashida (righteous Caliphate) on the method of Prophethood, where, for example, it will work to:

Minimize pollution, due to the saying of the Messenger of Allah (saw):

“Be on your guard against three things which provoke cursing: easing in the watering places and on the thoroughfares, and in the shade (of the tree)”

the Hadith forbids all that harms Muslims in their public resources and their environment and roads.

The cleanliness of water sources and the quality of drinking water, due to saying the Messenger of Allah (saw):

“You should not pass urine in stagnant water which is not flowing then (you may need to) wash in it.”,

and narrated from Jaber bin Abdullah, may Allah be pleased with him:

“The Prophet commanded (us) to tie up our water skins and cover our vessels.”

This is because of the water content of these containers. The state had a duty to pay attention to the cleanliness of the water sources and to control the quality of drinking water and that its pollution free.

This is in addition to paying attention to the sewage, treatment for disposal and removal of damage resulting from it, and sanitary engineering of the residential environment, so that the engineering of cities and communities will allow proper ventilation, and prevent overcrowding of the population, and facilitates the process of the sewage, cleaning the streets and the removal of rubbish, and all types of pollutants from noise and disturbance and poisons.Al-Hafidh ibn Hajar reported in Al-Fath from Omar ibn Shabbah in Akhbar Al-Madinah, he said: (Omar bin Al-Khattab saw a blacksmith’s bellows  in the market and he beat it with his leg, until he destroyed it) The blacksmith’s bellows, is what he blows , it causes harm and contaminates the air, with smoke and fowl smell and noise, this is why Amir Al Mu’minin Omar removed it from the market, because it is a public place that people visit frequently…. and there are many other practical solutions in Islam available for the executive sincere and honest authority that represent the Deen of the people and their aspirations.

We in Hizb ut Tahrir / Wilayah of Lebanon, are aware of the depth of corruption of this authority, and even the corruption of the entity itself, which was established by the kafir colonial West, who appointed a group of corrupt people to run it, who serve the interests of their masters, then their own pockets and bank accounts. None of them is exempted, no one who blends and coexist with this authority except those of the same nature, and corruption! But we still see a glimmer of hope in people, such as those who answered the call for sit-ins in Fawwar and Terbol, and hindered the implementation of death and destruction projects in their areas … Do not be frighten by what the threats of the Authority, and do not accept that this matter is passed in a region and not in another, then this saying will describe you: I was eaten the day the white bull was eaten (do not keep silent over the oppression that befalls others because it will reach you)

You must continue the sit-ins, and prevent the garbage trucks from reaching areas that are intended to be made as dumping grounds and landfills, and expose politicians who have deceived the people, by opening the roads and claimed to cancel the landfill! This is a serious matter, that concerns your health and the health of your children, and even the generations after you, from Tripoli to the foothills of Eastern and Western Terbol … So continue and be patient, verily victory is the patience of an hour, and Allah is with you and will not forget to reward you for your deeds.