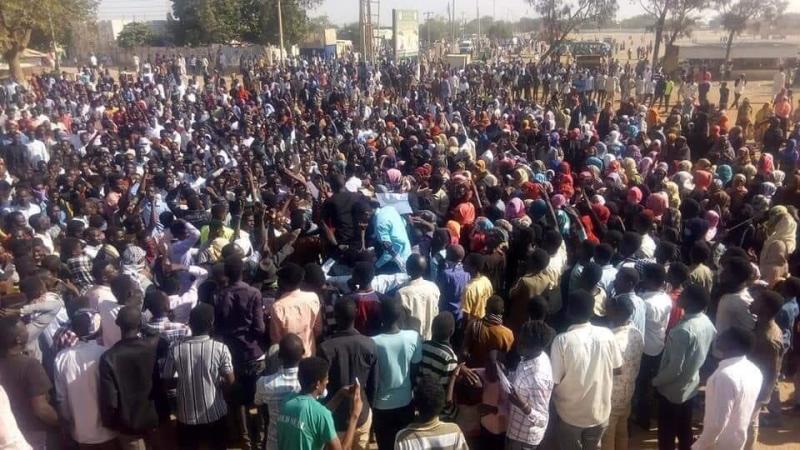 The Islamic Ummah is a living Ummah, it can get sick but it does not die, and now the events have escalated in various cities of Sudan, and in the capital, where masses of people went out to the streets calling for regime change, clothed with the virtue of the rejection of injustice and working for change. Allah (swt) says:

“And do not incline toward those who do wrong, lest you be touched by the Fire” [Hud: 113]

In order not to repeat the previous experiences, since the secession of Sudan from Egypt in the so-called independence, through the movement of the masses in October 1964, and in April 1985, which plummeted people from bad to worse, and to fortify the revolution of the masses to reach real change, Hizb ut Tahrir / Wilayah of Sudan considers that this requires that the revolutionaries on the streets adhere to the following:

– Peaceful demonstration following the Prophet’s ﷺ example, the holder of the banner of real change, who established the first state based on the great Islam, without shedding one drop of blood.

– Do not be dragged behind suspicious acts; from destruction, sabotage, and obstructing the public roads … because all of this is Haram in Islam, and injustice to the soul, and to others, and being equal with the oppressive authority, that we want to change, in disobedience. The Prophet   :

“There should be neither harming nor reciprocating harm, Whoever harms others, Allah (swt) will harm him; and whoever causes hardship to other Allah will cause hardship to him.”

– To target the change of injustice with justice, and justice is only achieved by Islam, so our demand must be to resume the Islamic way of life, and the implementation of Islamic law (Shariah), by the establishment of the second Khilafah Rashida (rightly guided Caliphate) on the method of Prophethood, in adherence to Allah’s guidance who said in His noble Book:

“Say, “I only follow what is revealed to me from my Lord. This [Qur’an] is enlightenment from your Lord and guidance and mercy for a people who believe.” [Al-A’raf: 203]

– To continue the revolution, to seek change, and to reject any change based on non-Islam; like patriotism that divides the Ummah, and the Kafir unjust democracy, and other basis … And not relying on the colonial Kuffar and their institutions, because the real change is based only on the Islamic creed. And to rely on Allah alone, He is the Mighty and who provides the victory,

“And victory is not but from Allah. Indeed, Allah is Exalted in Might and Wise” [Al-Anfal: 10]

To the Security and Police Forces:

It is Haram in Islam (Shariah) to kill, beat or intimidate the protestors, the Prophet ﷺ said:

“The extinction of the whole world is less significant before Allah than killing a Muslim man.”

Do not be a tool in the hands of false oppressive regimes, and who will be losers in the Hereafter.

To our sons from the people of power and protection in the armed forces, loyal to their creed:

Be like the Ansar who supported the Messenger of Allah ﷺ; he ﷺ established a state for Islam, that radically transformed the life of ignorance (Jahiliya) into a clean Islamic life. It changed the political, economic, social and moral world map, and changed the situation of the Muslims from humiliation, weakness and dishonour to becoming the masters of the world, and the best Ummah brought to mankind… So repeat the same action, O sincere people of power and protection, and change the face of history, you can do so when you side with your Ummah, by giving the support (Nusra) to Hizb ut Tahrir to establish the second Khilafah Rashida (rightly guided Caliphate) on the method of Prophethood.

“And We have already written in the book [of Psalms] after the [previous] mention that the land [of Paradise] is inherited by My righteous servants * Indeed, in this [Qur’an] is notification for a worshipping people.” [Al-Anbiya: 105-106]