Memorandum of Protest: To the Government of the Republic of India on the Persecution of Muslims in India 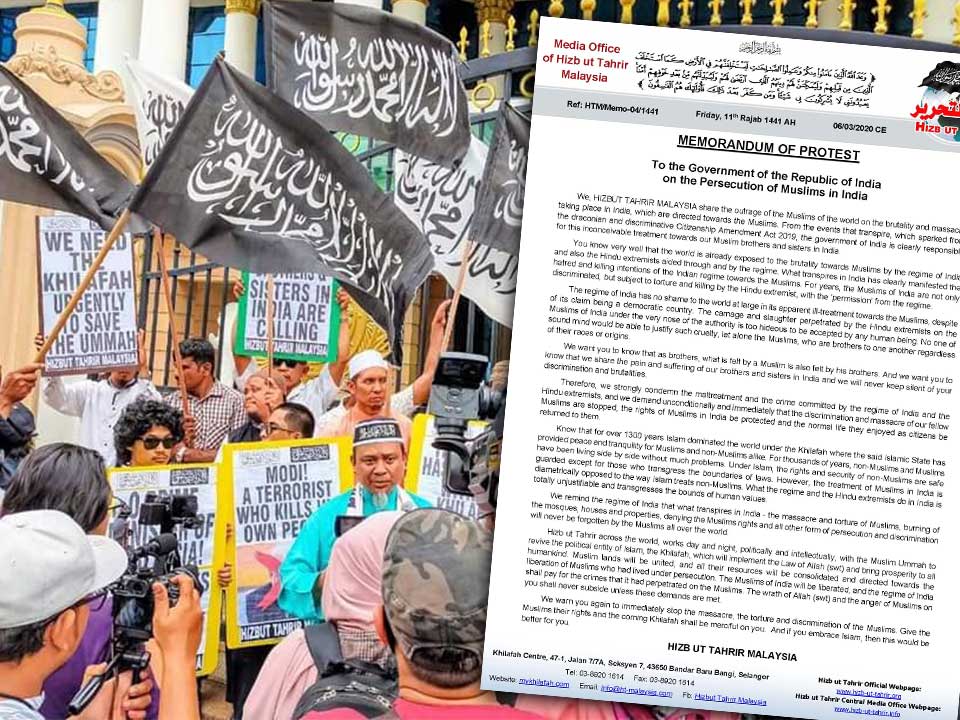 We, HIZBUT TAHRIR MALAYSIA share the outrage of the Muslims of the world on the brutality and massacre taking place in India, which are directed towards the Muslims. From the events that transpire, which sparked from the draconian and discriminative Citizenship Amendment Act 2019, the government of India is clearly responsible for this inconceivable treatment towards our Muslim brothers and sisters in India.

You know very well that the world is already exposed to the brutality towards Muslims by the regime of India and also the Hindu extremists aided through and by the regime. What transpires in India has clearly manifested the hatred and killing intentions of the Indian regime towards the Muslims. For years, the Muslims of India are not only discriminated, but subject to torture and killing by the Hindu extremist, with the ‘permission’ from the regime.

The regime of India has no shame to the world at large in its apparent ill-treatment towards the Muslims, despite of its claim being a democratic country. The carnage and slaughter perpetrated by the Hindu extremists on the Muslims of India under the very nose of the authority is too hideous to be accepted by any human being. No one of sound mind would be able to justify such cruelty, let alone the Muslims, who are brothers to one another regardless of their races or origins.

Therefore, we strongly condemn the maltreatment and the crime committed by the regime of India and the Hindu extremists, and we demand unconditionally and immediately that the discrimination and massacre of our fellow Muslims are stopped, the rights of Muslims in India be protected and the normal life they enjoyed as citizens be returned to them.

Know that for over 1300 years Islam dominated the world under the Khilafah where the said Islamic State has provided peace and tranquility for Muslims and non-Muslims alike. For thousands of years, non-Muslims and Muslims have been living side by side without much problems. Under Islam, the rights and security of non-Muslims are safe guarded except for those who transgress the boundaries of laws. However, the treatment of Muslims in India is diametrically opposed to the way Islam treats non-Muslims. What the regime and the Hindu extremists do in India is totally unjustifiable and transgresses the bounds of human values.

We remind the regime of India that what transpires in India – the massacre and torture of Muslims, burning of the mosques, houses and properties, denying the Muslims rights and all other form of persecution and discrimination will never be forgotten by the Muslims all over the world.

Hizb ut Tahrir across the world, works day and night, politically and intellectually, with the Muslim Ummah to revive the political entity of Islam, the Khilafah, which will implement the Law of Allah (swt) and bring prosperity to all humankind. Muslim lands will be united, and all their resources will be consolidated and directed towards the liberation of Muslims who had lived under persecution. The Muslims of India will be liberated, and the regime of India shall pay for the crimes that it had perpetrated on the Muslims. The wrath of Allah (swt) and the anger of Muslims on you shall never subside unless these demands are met.

We warn you again to immediately stop the massacre, the torture and discrimination of the Muslims. Give the Muslims their rights and the coming Khilafah shall be merciful on you.  And if you embrace Islam, then this would be better for you.