Memorandum of Protest: To the Government of the People’s Republic of China on the Ongoing Torture against the Muslims of East Turkestan 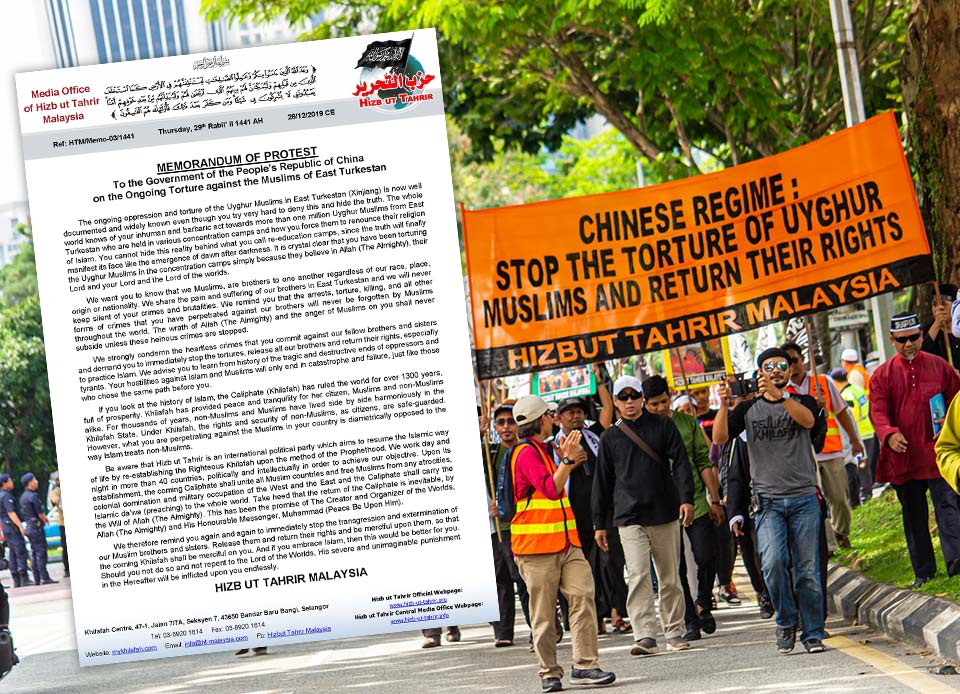 The ongoing oppression and torture of the Uyghur Muslims in East Turkestan (Xinjiang) is now well documented and widely known even though you try very hard to deny this and hide the truth. The whole world knows of your inhuman and barbaric act towards more than one million Uyghur Muslims from East Turkestan who are held in various concentration camps and how you force them to renounce their religion of Islam. You cannot hide this reality behind what you call re-education camps, since the truth will finally manifest its face like the emergence of dawn after darkness. It is crystal clear that you have been torturing the Uyghur Muslims in the concentration camps simply because they believe in Allah (The Almighty), their Lord and your Lord and the Lord of the worlds.

We want you to know that we Muslims, are brothers to one another regardless of our race, place, origin or nationality. We share the pain and suffering of our brothers in East Turkestan and we will never keep silent of your crimes and brutalities. We remind you that the arrests, torture, killing, and all other forms of crimes that you have perpetrated against our brothers will never be forgotten by Muslims throughout the world. The wrath of Allah (The Almighty) and the anger of Muslims on you shall never subside unless these heinous crimes are stopped.

We strongly condemn the heartless crimes that you commit against our fellow brothers and sisters and demand you to immediately stop the tortures, release all our brothers and return their rights, especially to practice Islam. We advise you to learn from history of the tragic and destructive ends of oppressors and tyrants. Your hostilities against Islam and Muslims will only end in catastrophe and failure, just like those who chose the same path before you.

If you look at the history of Islam, the Caliphate (Khilafah) has ruled the world for over 1300 years, full of prosperity. Khilafah has provided peace and tranquility for her citizen, Muslims and non-Muslims alike. For thousands of years, non-Muslims and Muslims have lived side by side harmoniously in the Khilafah State. Under Khilafah, the rights and security of non-Muslims, as citizens, are safe-guarded. However, what you are perpetrating against the Muslims in your country is diametrically opposed to the way Islam treats non-Muslims.

Be aware that Hizb ut Tahrir is an international political party which aims to resume the Islamic way of life by re-establishing the Righteous Khilafah upon the method of the Prophethood. We work day and night in more than 40 countries, politically and intellectually in order to achieve our objective. Upon its establishment, the coming Caliphate shall unite all Muslim countries and free Muslims from any atrocities, colonial domination and military occupation of the West and the East and the Caliphate shall carry the Islamic da’wa (preaching) to the whole world. Take heed that the return of the Caliphate is inevitable, by the Will of Allah (The Almighty). This has been the promise of The Creator and Organizer of the Worlds, Allah (The Almighty) and His Honourable Messenger, Muhammad (Peace Be Upon Him).

We therefore remind you again and again to immediately stop the transgression and extermination of our Muslim brothers and sisters. Release them and return their rights and be merciful upon them, so that the coming Khilafah shall be merciful on you. And if you embrace Islam, then this would be better for you. Should you not do so and not repent to the Lord of the Worlds, His severe and unimaginable punishment in the Hereafter will be inflicted upon you endlessly.