Q&A: Obama’s Visit to Saudi Arabia and its Repercussions on Syria

Answer to the Question 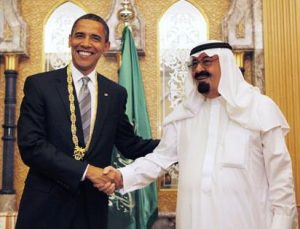 “Al Hayat” site posted on 08/03/2014, quoting French news agency AFP said: “The Supreme Military Council of the FSA ratified the appointment of Brigadier Abdul Ilah al-Bashir al-Naimi as chief-of-staff to replace Major General Salim Idris…” it came in the framework of “completing the Supreme Military Council…”, and this completion included other appointments in the army… These events have coincided with leaked news about Turkey’s closure of the coalition’s offices and the possibility of moving these to Cairo. The question is: Do these changes and the leaked news have a relationship to Obama’s visit, particularly to Saudi Arabia later this month for the Saudi Arabia’s role in the fighting fronts in Syria, in particular the southern front? And what is intended by the closure of offices? Jazak Allahu Khairan.

Obama’s visit to Saudi Arabia later this month, and the completion of the Supreme Military Council by discharging Maj. Gen. Salim Idris and the appointment of Brigadier General Abdul IIah al-Bashir in his place, are two routes that meet on the broad outlines of U.S. policy in Syria, but differ in details; each has a path to achieve its specific purposes. To clarify this we indicate the following:

First: regarding Obama’s visit to the region, particularly to Saudi Arabia later this month:

It is clear from the foregoing that the visit to Saudi Arabia will be at the end of this month after Obama’s visit to Italy on 27th March 2014.

Also, the Washington Post published on 3rd February that White House Press Secretary Jay Carney said in a press conference, “Saudi Arabia is a close partner of the United States, and we have a bilateral relationship that is broad and deep and covers a range of areas. The president very much looks forward to the visit, where all of those areas will be discussed in his meetings… and whatever differences we may have do not alter the fact that this is very important and close partnership”.

American newspaper, The Wall Street Journal, also mentioned on 02/01/2014, that U.S. President, Barack Obama, plans to visit Saudi Arabia next month for a summit with Saudi King Abdullah bin Abdul Aziz, to soothe the strained relations between them because of the policies adopted by the U.S. administration towards the Middle East, specifically about the Iran’s nuclear program, and its unwillingness to get involved military in Syria’s civil war. A Syrian newspaper quoted one Arab official saying that this summit will be crucial, and it aims to aligning American and Saudi policies, adding that the visit “is about deteriorating relationship and declining trust”.

This means that there are issues that pushed America to add Saudi Arabia stop to his pre-planned visit, in a statement released after more than ten days of the issuance of the statement of Obama’s scheduled visit to the three European regions! To find out these issues and their motives we review the following:

All this is causing disturbance for America for the possibility of some rebels in the southern front getting out of its control especially that there are forces in Saudi that are loyal to British and follow on its steps in terms of perturbing American plans, as it is known of British politics… All this has made America afraid of Saudi activity in the southern front in Syria … Although America has on 13th December 2013 established the Syrian revolutionaries front of the FSA and its base in the South, in response to the Saudi’s movements in southern Syria, but America takes the movements of Saudi in the south seriously, especially those movements that go beyond coordination with the American Chamber in Jordan.

A visit here is to ease tensions with Saudi Arabia, and to clarify its rapprochement with Iran. And its position in Syria is not directed to destabilize the Saudi regime, and America understands that the focus of alert is that the rule of the Saudi clan is not to be affected in Saudi Arabia, and their chairs do not become vacant, this is what concerns them, which matters above and beyond the number of dead and wounded in Syria…

However it is likely that Obama during his visit to the region will stop at other places, but Obama’s visit to Saudi Arabia is expected to be the touchstone… Obama will try to reassure the rulers of Saudi Arabia that their thrones are protected and that his relationship with Iran, Iraq, Syria, Lebanon and Yemen is not directed against the Saudi rule but it is against the so-called “terrorism”. It is expected that Obama will praise the steps of Saudi Arabia is taking in this area and in its decisions to prevent the Saudi citizens from going to fight in Syria…

Second: As for the subject of the dismissal of Salim Idris and the closure of some offices and transferring to Cairo … the matter probably is as follows:

Salim Idris’s initial reaction was one of anger and he accused Jarba, the coalition chairman, of being a dictator; he issued a statement on behalf of the leaders of the fronts and military councils blaming Jarba of being responsible for the decision of the Supreme Military Council; he said: “The leaders of the formations do not trust him and accused him of financial corruption and that he bribes the signatories of the decision.” (AFP 17/2/2014) knowing that Jarba and those with him cannot take any decision without the consent or instigation of America!

Idris calmed down, especially when the news was published on 06/03/2014, “that the head of the Syrian Coalition, Ahmed Jarba and the five military General Staff leaders and revolutionary leader of the Southern Front and the head of the Revolutionary Military Council ‘s military in Deraa, agreed that the defense minister Asaad Mustafa should resign to the President of the Coalition, and all of his deputies will be considered resigned… the leaders also agreed that Major General Salim Idris should resign from the presidency of the General Staff, and to be appointed as an adviser to the president of the Coalition for Military Affairs; as well as the expansion of the Supreme Military Council and increase the number of its members.”

This news on 6/3/2014 was then followed and confirmed by the news on 8/3/2014 published by Al Hayat site, quoting the French news agency AFP on 03/08/2014, “The Supreme Military Council of the FSA approved the appointment of Brigadier Abdul Ilah al-Bashir al-Naimi chief of his staff instead of Major General Salim Idriss.”

These qualities of Bashir of belonging to the clan in the south and bing the field commander on the ground is what made America appoint him with the hope that he can establish the roots internally for its agents abroad … It will be disappointed, by permission of Allah, as they were disappointed before, and Allah is Mighty and Wise .

Third: The closure of some offices in Turkey and the discussion to transfer to Cairo:

But the news did not last long, it was denied in the Middle East Newspaper on 25/2/2014:  “Representative of the Syrian coalition in Turkey Khaled Khoja denied to the Middle East  news paper that  the Turkish government asked the coalition to relocate its headquarters to Cairo, revealing  a meeting yesterday between him and the representatives of the Turkish Foreign Ministry that confirmed that the members of the coalition are welcome in Turkey; it is a position emanating from the principles associated with the support of the Syrian people’s struggle against dictatorship.”

As stated in Rosna site also on 24/02/2014 in Paris, “Bahiya Mardini, media adviser to the Syrian opposition coalition, said that the Turkish government has not closed the offices of the Coalition in Turkey”, Mardini confirmed in a special radio call to Rosna that this news came as part of a campaign initiated by the Syrian regime against the coalition prior to the Geneva II, and it was promoted in sites belonging to the Syrian regime. Mardini explained that the coalition did transfer offices from the region, Birgili to the region, Florea in Turkey.  As a result of information of threats from ISIS (Islamic State of Iraq and Sham) and the Syrian regime they have been transferred by the Turkish Government for security reasons and that is what made the coalition transfer its office to a quieter place after it was in a crowded area.”

It seems that the rumors on the subject have actually happened, but the move was from one place to another place inside Turkey. The focus of the transfer to outside Turkey was intentional in order to send a message to the Coalition and the National Council to rejoin together again, but the move from Turkey to Cairo is scary for them because it keeps them away from Syria, which means their death, as an alternative for them in Turkey will be established after the “expulsion” of the veterans to Cairo! This leak out of news has paid off. The National Council announced its reunion with the Coalition!  AFP published on 1/3/2014, “The Secretariat of the Syrian National Council decided at its meeting on 27 and 28 February in Istanbul, the mass return of the National Council including all its components to the ranks of the National Coalition for the forces of the revolution and the Syrian opposition.”

Fourth: this is what I see as most likely the answer to your question with the three points mentioned, we are following the subject, though if a reason is found to further clarify or explain, we will do that, Inshallah, Allah (swt) Guides to the straight path.