Q&A: Truth of the Recent American Air Strikes on Syria! 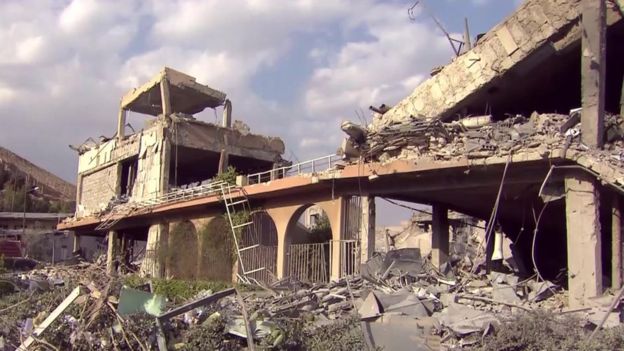 In our publication dated 11/4/2018, on Putin, Rouhani and Erdogan’s meeting, it is stated that these three are implementing America’s interests in Syria to instill the secular rule under US influence. Thus, Putin is working in Syria in coordination with America and for its service. What is behind the American strike on Syria tonight despite the fact that Putin has troops in Tartous and Hameim? How can the work be in coordination with America when America strikes his forces in Syria? And how can there be an alliance between America, Britain and France while their interests are different? Please clarify this, Jazak Allah Khair, and sorry for the speed of the question.

1- First, I want to correct a part of the question. America did not hit Russia’s positions in Syria. This is clear in the statement of the Russian Defense Ministry this morning, 14/4/2018, but it hit around its sites and very close to them, while it (Russia) remained silent although it claims to be the owner and in charge of the country and the people in Syria!

2- The American strike is more of a discipline to Russia than a strike on Syrian chemical weapons. About ten sites were struck at dawn today. However, some comments by military experts in the media this morning stated that few of these sites are chemical plants or research centers, but the majority was military sites.

3- As to how Russia is disciplined; despite its services in Syria for the benefit of America, Russia was touched by a bit of pride. It tried to exploit its activity in Syria with an air of arrogance as if it held the reins in Syria, and it went beyond the permissible, beyond its job, which is to consolidate America’s influence in Syria, and not to replace America. This is why the strike was in Russia’s zone, close to its positions to reduce Russia down to its size. And in case it slips again and exploits its work in Syria to emerge as a center of power or influence, then America will stand in front of its face to the point of insult, as the Russian ambassador in Washington said that the American strike was an insult to Putin personally and not only to Russia!

4- But why was the strike aimed at insulting Russia more than striking the Syrian sites? It is because Trump’s “yapping” lasted a few days before the strike. It was a message to the (Syrian) regime to vacate its positions; this is why the losses were material even though the rockets fired were more than 100 rockets. The impact was not new to the (Syrian) regime as it is used to insults. It is humiliated and is accustomed to humiliation, and this is the case with agents; their masters do not see the harm in beating them up whenever the interests of the masters required. Many incidences in history show this and America did this last year after the events of Khan Shaykhun. Therefore, this is not new for agents, but they are “trained” to accept this. Worse still is that after the beating, the agent celebrates the victory! However, what we need to note is the impact on Russia, which withdrew most of its vessels, and evacuated some sites to escape the expected strike. Although the strikes were close to its positions and it was claiming to be in charge in Syria, yet it did not use its air defenses to repel the strike as Russian Defense Ministry announced at noon today!

5- In a statement by a Russian official this morning, he announced that Russia would lodge a complaint to the Security Council, and indeed it submitted it, and the Security Council decided to meet at 1500 GMT today. That is, Russia did what weak states do, when the only option for them when meeting the aggression is to complain. Russia was actually attacked, even though its bases were not targeted. This is because it was roaming and wandering in Syria, tickling its feelings with the greatness of the former Soviet Union, so this strike, as mentioned above, was to reduce it to its size and put it back in its place. Russia did not dare to take any material action against the strike. Thus, the Russians political stupidity shows; they are making continuous efforts in Syria, yet they are not in charge, and the decision is in the hands of America. They did not learn from their long years in Egypt when with “a stroke of a pen” Sadat removed them out of Egypt; this is because America was in charge, but the Russians did not realize this. They repeated this today in Syria; they carry out acts of brutality for the benefit of others, out of hatred of Islam and Muslims. These atrocities, committed by Russia, America stands behind them; they will not be erased from the minds of Muslims, and the tables will turn one day, we pray it is soon.

6- But what is mentioned in the question regarding an alliance between America, Britain and France, it is not exactly an alliance in the sense of forming an alliance between states and opposing others, rather, this (participation) was with the permission of America, like what happened in Iraq and Syria, with the formation of the international coalition under the pretext of combating terrorism, when America agreed to involve Britain and France in the alliance. We have already mentioned this in details in our previous publications.

7- What is painful is that the influential countries in the world are meddling in our countries and are in charge over them, while we have no state that unites us and restores our glory. Otherwise, America would have realized, in word and deed, how it paid (traffic fees) when entering the Mediterranean Sea to the Wali of the Ottoman state in Algeria. And France also would have realized how it called for the help of Caliph of the Muslims, Suleiman the Magnificent (Al-Qanoni), to save its captured monarch. And Britain would have realized how it was apologizing to the Ambassador of the Ottoman state in London for the insults the Prophet by a theater man. And when did all this take place? When the Ottoman Khilafah was at its weakest point, and had to accept the apology, otherwise the response would have been stronger.

Every Muslim must exert his effort to work with Hizb ut Tahrir to re-establish the rule of Allah, the Khilafah Rashida (rightly guided Caliphate) on the method of Prophethood, and then Islam and Muslims will be victorious, and Kufr and the Kuffar will be humiliated.

“…And that day the believers will rejoice (4) In the victory of Allah. He gives victory to whom He wills, and He is the Exalted in Might, the Merciful”