Ramadhan Demands the Abolition of Democracy, the Guardian of Corruption, and the Restoration of Khilafah on the Method of Prophethood 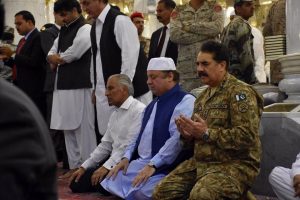 “Indeed, We have revealed upon you a Book in Truth, to rule between the people by what Allah has shown you.”

However, Ramadhan today is far from that which pleases Allah سبحانه وتعالى, with the Ummah burdened by a political and military leadership that does not fear Allah سبحانه وتعالى, rules by other than the Book of Truth and seeks only personal gains, such that its financial corruption has become so severe that it can no longer be hidden from the eyes of the world, despite the existence of decades-old secret channels. Indeed, it is clear that those linked to the current system, whether from the rulers or the opposition or from the political leadership or military leadership, are steeped in financial corruption to the order of billions of Rupees. Moreover, corruption, financial and otherwise, is inevitable in the current system, because Democracy is a system of whims and desires, allowing those at its helm to manipulate laws according to their interests or those of their Western masters, disregarding all that Allah سبحانه وتعالى has revealed. Allah سبحانه وتعالى said,

“And judge between them by what Allah has revealed, and do not follow their desires, and beware (O Muhammad) that they might seduce you from some of what Allah has sent down to you.”

Clearly, Democracy is the reason why the current military and political leadership is usurping the wealth of the Ummah while the affairs of the Muslims are in tatters, with the Ummah suffering in horrific poverty despite its immense resources, with its lands occupied or the scene of devastating war, from Syria and Palestine to Afghanistan and Occupied Kashmir, despite collectively possessing the largest armed forces in the world. Democracy is based on secularism, which demands the detachment of our beloved Deen from our lives and so is the guardian of all forms of corruption, from economic misery to foreign policy humiliation. Anyone who still places hope in Democracy is condemning themselves to continuous disappointment.

Ending corruption of all forms, financial or otherwise, mandates the abolition of Democracy and the restoration of the Khilafah (Caliphate) on the Method of the Prophethood in its place and so it is upon all of us to work with Hizb ut-Tahrir for the practical change that we all need and desire. Hizb ut-Tahrir is fully committed and prepared for the return of Islam as a way of life, state and constitution. Hizb ut-Tahrir has prepared a complete blueprint for the Khilafah State, including all its details from the economic system to the education policy, based entirely on the Quran and Sunnah, as well as a comprehensive constitution of 191 articles. And Hizb ut-Tahrir has prepared armies of capable politicians, men and women, who strive against the oppressors enduring all manner of persecution and hardship, fearing none but Allah سبحانه وتعالى and assured of RasulAllah’s ﷺ good tidings of the restoration of the Khilafah on the Method of the Prophethood,

You are witness today to a powerful global movement for the restoration of the Khilafah on the Method of the Prophethood, wherein the Ummah is sacrificing immensely for Islam, despite all the plots of the Western colonialists against it. And you are aware of the Raheel-Nawaz regime’s increased persecution of the brave and aware advocates of the Khilafah on the Method of the Prophethood, from the Shabaab of Hizb ut-Tahrir, as the regime fears that they are about to succeed in their goal. You cannot be merely passive observers to this critical struggle for it is obvious that the power for real change in Pakistan lies within you, the armed forces, as it does in other Muslim countries. It is the silence or support of the armed forces that allows the repeated change in the faces of Democracy that we have seen for over nearly seven decades. Democracy, the guardian of corruption, continues today only because traitors in your leadership have successively used your great strength only in support of man-made systems such as Democracy and Dictatorship. How do you accept such abuse of your strength and power in this way, O you who have taken oath before Allah سبحانه وتعالى to protect the country and its people?!

And how do you accept such abuse when RasulAllah (saw) established the Islamic State according to a Method from which he never wavered, despite severe hardships in its way, the Method of seeking of Nussrah (Material Support) from the men of war, fire and steel? RasulAllah ﷺ personally met your predecessors and demanded from them the Nussrah for the complete, comprehensive and immediate implementation of the Deen. He ﷺ patiently persisted in this methodology, fearing none but Allah سبحانه وتعالى and caring not for the blame of the blamer, until Allah granted success with the Ansar (ra), a small but sincere and brave group of men of war, who gave the Second Pledge of Aqaba, the Pledge of Men, the Pledge of War.

So, Hizb ut-Tahrir stands before you now, calling you to grant it, under its Ameer, the eminent jurist and statesman, Sheikh Ata Bin Khalil Abu Al-Rashtah, the Nussrah for the immediate restoration of the Khilafah on the Method of Prophethood. This is how you will be honored in this life and rewarded in the next. Thus we demand from each and every one of you in this month of great reward to extend the Nussrah to Hizb ut-Tahrir, reminding you of the reward of your brothers-in-arms who proceeded you in establishing Islam as a state and a rule in Madinah, by giving the material support (Nussrah) to RasulAllah ﷺ, such as Saad (ra). Indeed, when Sa’ad (ra) died, his mother wept and RasulAllah (ra) told her,

“Your tears would recede and your sorrow be lessened if you know that your son is the first person for whom Allah smiled and His Throne trembled.” [At-Tabarani]