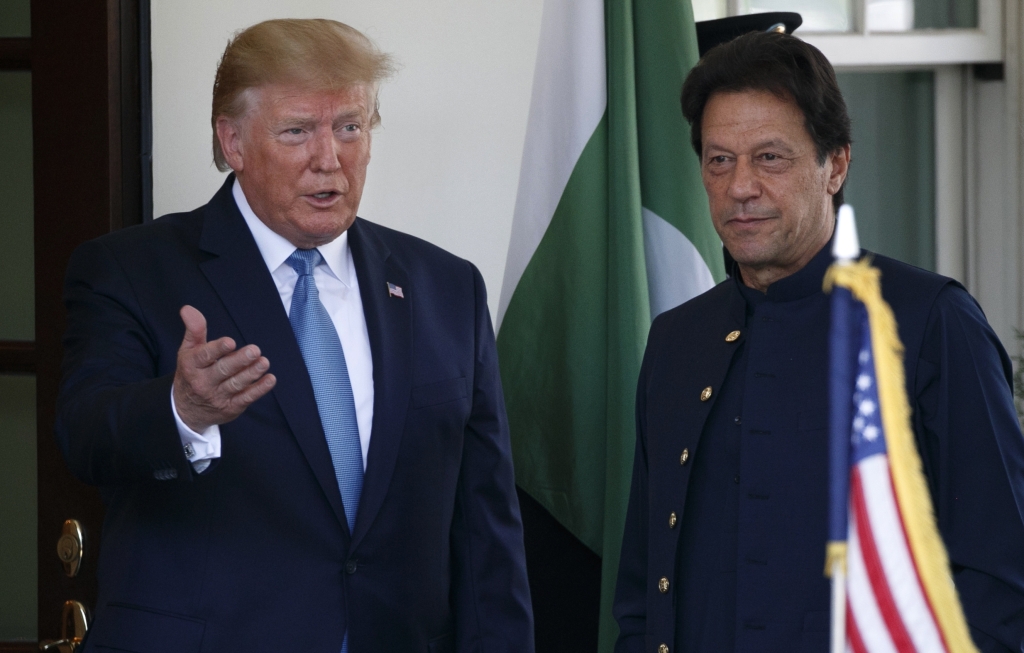 As the arrogant Fir’awn, US President, Donald Trump, intensified his campaign for re-election, Pakistan’s military and political leadership dutifully undertook a visit to the US to honour their alliance with the United States, whilst prominently paying homage to Trump. Reflecting a wide-ranging commitment to the foremost state in enmity to Muslims and Islam, Pakistan’s Prime Minister was accompanied by the Director-General of the Inter-Services Intelligence (ISI) and the Chief of Army Staff, as well as the Finance Advisor. Moreover, far from strengthening Pakistan, the Bajwa-Imran regime’s loyalty to Trump exposes us to destructive US plans against our economy, our nuclear assets, Occupied Kashmir and Afghanistan.

Whilst Trump is staring at a humiliating defeat by a hardy Muslim people that previously forced the retreat of the formidable forces of both the British Empire and Soviet Russia, the Bajwa-Imran regime’s officials act as America’s “hired facilitators” for a desperately needed political settlement for the exhausted US military in Afghanistan. On 22 July 2019, earning vigorous appreciation from Trump, Imran Khan loyally assured him that, “we will be able to urge the Taliban to talk with the Afghan government and come to a political solution.” And on 23 July 2019, General Qamar Bajwa met the US military leadership in the Pentagon to fully brief it on his efforts to demoralize the Afghan armed resistance, so as to coerce them into talks. Thus, the Bajwa-Imran regime strives to ensure that the US wins on the negotiation table that which it could not win on the battlefield in almost two decades, so that some of the crusader troops remain both within striking distance of our nuclear assets and close range for extending support to the forces of the Hindu State. And the Bajwa-Imran regime is allying with an aggressive state, that occupies our lands itself, whilst fully supporting the brutal occupations of the Jewish entity and the Hindu State, even though Allah (swt) said,

As for the US plan for normalization with India, on 22 July 2019, Imran Khan asserted full confidence in Trump for mediation between India and Pakistan, gushing enthusiastically that, “There are over a billion and quarter people in the subcontinent, they are held hostage to the issue of Kashmir, and I feel that only the most powerful state, headed by President Trump, can bring the two countries together.” Thus, the Bajwa-Imran regime grants Trump a commanding position so that he can force substantial concessions regarding our military and nuclear capability, economy and political stances, under the banner of Confidence Building Measures, whilst laying waste to the seven decades of monumental sacrifices made by the Muslims in Occupied Kashmir to liberate themselves and unify with Pakistan. And the regime is granting America authority for judgement over our affairs, even though Allah (swt) said,

As for the US plan for Pakistan’s economy, whilst dangling promises of foreign economic aid and international trade in front of our noses, the Bajwa-Imran regime unleashes economic ruin on us through collaboration with America’s colonialist tool, the IMF. And having crippled our agriculture and industry, the Bajwa-Imran regime is currently building a public opinion to open our economic borders to India, so that its goods may flood our markets, which are already suffering from the dominance of Western multinational companies. As for the economic aid from the US itself, it is a well-established style of colonialism which has guaranteed destructive dependence on America throughout the world, from Latin America to South East Asia. Thus, the Bajwa-Imran regime bribes us for our consent to its alliance with the kuffar, with false promises of rivers of milk and honey, even though Allah (swt) warned,

“Neither those who disbelieve among the People of the Book nor Al-Mushrikun like that there should be sent down unto you any good from your Lord. And Allah bestows grace upon whom He chooses- for Allah is limitless in His great bounty” [Surah al-Baqarah 2: 105].

O Muslims of Pakistan and their Armed Forces in Particular!

Since the destruction of our shield, the Khilafah, far from being a source of strength, alliance with colonialist states has only brought us foreign policy humiliation and economic misery throughout the Muslim World. It is not from wisdom to undertake the same steps in expectation of a different result. The words of the treacherous Musharraf still ring in our ears when he promised, on 19 September 2001, that alliance with the US will secure our sovereignty, economy, strategic assets and Kashmir cause, which did not happen. Yet, the Bajwa-Imran regime is now working to strengthen the same alliance that ensured huge losses, chaos and upheaval throughout Pakistan, even though disobedience of Allah (swt) will neither grant us prosperity nor security. Allah (swt) warned,

“The example of those who take allies other than Allah is like that of the spider who takes a home. And indeed, the weakest of homes is the home of the spider, if they only knew.” [Surah Al-Ankabut 29:41].

The wise leadership is the one that adheres to Revelation for guidance. The guaranteed source of our strength is our great Deen as implemented by the Khilafah (Caliphate) on the Method of the Prophethood. Thus, Hizb ut Tahrir calls us all to work with it for the resumption of Islam as a way of life. And thus Hizb ut Tahrir calls upon the officers of our armed forces to grant it their Nussrah (Material Support) so that it can practically rule by all that Allah (swt) has revealed. It is the Khilafah alone which will mobilize all our abundant resources for the service of Islam and Muslims. And it alone will work to unify all the current states of Muslims into the single most resourceful state in the world. Allah (swt) said,