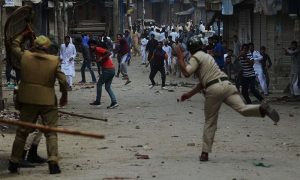 In his address to the UN General Assembly session on 21 September 2016, Pakistan’s Prime Minister, Nawaz Sharif, pleaded for talks with India, saying, “Talks are in the interest of both countries… Peace and normalization between Pakistan and India cannot be achieved without resolution of the Kashmir dispute.” On the same day, during a press conference in the United States, Pakistan’s Foreign Secretary pleaded for the US to play a role in talks with India, saying, “We believe that the US has a responsibility [to defuse the situation] and should play its role… We will keep asking US until they play that role.” Both these emphatic pleas came only two days after Nawaz Sharif’s extensive meeting with the US Secretary of State, to build upon the US-Pakistan Strategic Dialogue. The US State Department Spokesman stated that, “The Prime Minister and Secretary Kerry expressed strong concern with recent violence in Kashmir — particularly the army base attack — and the need for all sides to reduce tensions.”

Far from being a source of strength by which to counter India’s regional mischief, alliance with America is the root cause of our being progressively weakened before India. During the era of the Musharraf-Aziz regime, the US exploited Pakistan to ensure its invasion and subsequent occupation of Afghanistan. Then the US promptly opened the doors of Afghanistan to India to grant it an unprecedented presence and influence there, which the Hindu State began using as a base to destabilize Pakistan, igniting the fires of chaos and Fitna throughout Pakistan. Then, the Musharraf-Aziz regime declared Jihad in Kashmir as “terrorism,” an American demand that granted great relief to India, whose cowardly troops were shaken by small groups of poorly armed, yet highly motivated Muslims. Then the Kayani-Zardari regime fully engaged our armed forces on the Western border in defense of America’s occupying forces in Afghanistan, an American demand which granted India on the Eastern border even greater relief, further bolstering its regional ambitions. Moreover, in the era of Kayani, General Raheel personally revised Pakistan Army’s military doctrine, as embodied in its “Green Book,” to remove Army’s India centric focus as America demanded, thereby removing the Ummah’s most powerful and capable armed forces as an obstacle to the rise of India.

And now during the Raheel-Nawaz regime, traitors in the military and political leadership are hurtling towards US sponsored talks with India to bury any hope of a liberated Kashmir being unified with Pakistan forever. This American demand is to grant the Hindu State a victory through the maze of diplomatic talks that it could never secure for itself on the battlefield. This is why General Raheel echoes the American demands for diplomatic measures only over Kashmir when he proclaimed on 6 September 2016, “Kashmir is our lifeline, and we shall continue our diplomatic and moral support to the freedom movement at all levels.” And as for the “normalization” of relations, it represents even greater dangers for the Ummah as it is an American demand to further remove Pakistan as an obstacle to India as the dominant regional power. “Normalization” includes forceful suppression of Islam under the cover of “fighting extremism,” stabbing the Muslim resistance in Kashmir in the back under the cover of “ending cross border terrorism” and falling on the sword of self-inflicted nuclear disarmament under the banner of “restraint.”

No doubt, alliance with the United States is an illusion of strength but in reality represents our greatest cause of weakness. America is the foremost in ensuring that the Muslim Lands burn in the fires of chaos, occupied and savaged with impunity by both its own forces and those of the Jewish and Hindu states. An alliance with any openly belligerent enemy guarantees nothing other than repeated betrayal. And as for referring our affairs, including Kashmir, to the United Nations, it is as futile because the five permanent veto-yielding members of its Security Council are all belligerent enemies of Muslims and it is haraam because it is a non-Islamic authority (Taghut), ruling by Kufr. Allah سبحانه وتعالى said,

In blind obedience to the United States, the Raheel-Nawaz regime is now gathering momentum in betraying our brothers and sisters in Occupied Kashmir, as well as ensuring our humiliation and subjugation before the Hindu State. Whilst taking care to avoid provoking your anger, the Raheel-Nawaz regime is steadily advancing along the path of surrender, even though it is upon any truly sincere and strong ruler to mobilize you in a Jihad to end the humiliation, grant respite to the Muslims, energize their tired limbs and heal their broken hearts with sweet victory. True, indeed are the words of RasuAllah (saw), «مَا تَرَكَ قَوْمٌ الْجِهَادَ إلاّ ذُلّوا» “No people abandon Jihad except that they are humiliated” [Ahmad]. And we ask you, if our enemies are shaken by pitifully small bands of poorly-armed, yet extremely brave and determined Muslims, so how will they be when they face an organized Jihad by a fully-prepared and motivated Muslim Armed Forces?!

In such a situation it is not enough for you to support the Khilafah project with word alone for it is the only true means of strength and security from our enemies. We say this even though knowing very well that this support through words of yours has made the regime lose its mind in trying to stop the call for the Khilafah from ever reaching your ears by all means of force, abduction and torture that are available to it. No, the word is not good enough, when the deed is required. Answer the call of Hizb ut-Tahrir to fulfill your duty to grant Nussrah for the Khilafah (Caliphate) on the Method of the Prophethood.

Then and only then will you be lead by an Imaam who will unify the entire Ummah on one platform as the most resourceful state in the world. Then and only then will you be led by an Imaam whose foremost priority will be to forge us into the leading state that will determine the international scenario for the sake of making Islam the dominant way of life. Then and only then will you be led by a righteous Imaam to liberate the Muslim Lands from occupation in a glorious Jihad, whether it were Kashmir, Afghanistan, Palestine or Iraq. We call you to that which we love for you most, above all of the worldly possessions and pleasures that are to be found in this temporary and fleeting life, the reward and pleasure of Allah سبحانه وتعالى for your fire, steel and souls in His Way. RasulAllah ﷺ said, «مَا أَحَدٌ يَدْخُلُ الْجَنَّةَ يُحِبُّ أَنْ يَرْجِعَ إِلَى الدُّنْيَا وَلَهُ مَا عَلَى الأَرْضِ مِنْ شَىْءٍ، إِلاَّ الشَّهِيدُ، يَتَمَنَّى أَنْ يَرْجِعَ إِلَى الدُّنْيَا فَيُقْتَلَ عَشْرَ مَرَّاتٍ، لِمَا يَرَى مِنَ الْكَرَامَةِ»“Nobody who enters Paradise likes to go back to the world even if he got everything on the earth, except a Mujahid who wishes to return to the world so that he may be martyred ten times because of the dignity he receives (from Allah).” [Bukhari]