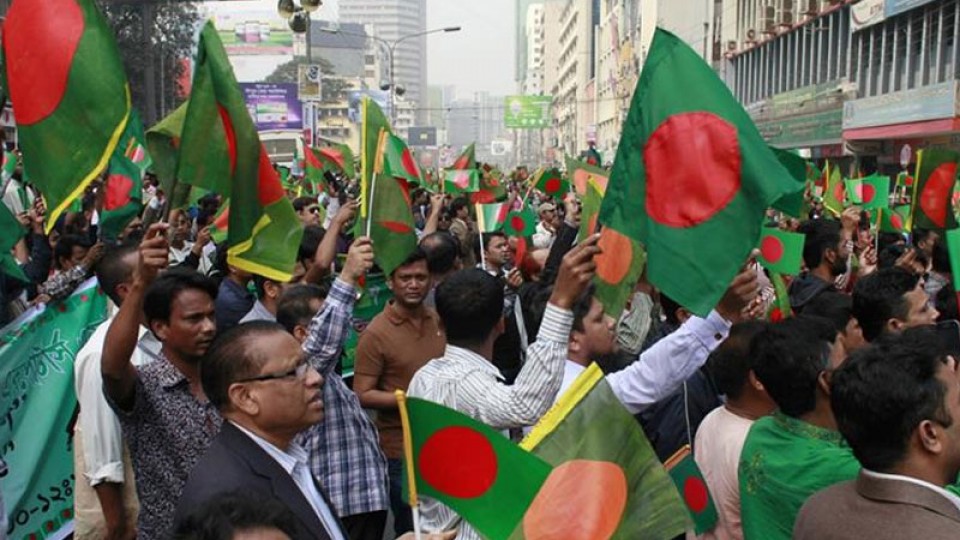 When the people are unified in the demand for the end of Hasina’s rule of tyranny, the so-called participatory election of the Awami-BNP ruling class is nothing but an evil ploy to continue her rule of tyranny. The Kafir imperialists, USA-Britain-India, want to ensure this participatory election so that their colonial interests over this country remain uninterrupted. O Muslims, instead of engaging in the meaningless debates and the cheap struggle of the election circus, fulfill the responsibility to your Imaan by marching forth in the activities for reestablishing the Khilafah Rashidah (Rightly Guided Caliphate), the only way of liberation for us chosen by Allah (swt).

We, Hizb ut Tahrir, urge you to participate in the following activities in order to remove this tyrannical rule and reestablish the Khilafah Rashidah:

* Reject the treacherous Awami-BNP ruling class. They use you as a means to gain authority, and after getting it, they oppress and tyrannize you.

* Make the rule of justice of the Khilafah the center point of discussion within your family and office, and in the social and political arena. Actively participate in the activities of Hizb ut Tahrir to establish as a strong public opinion that the Khilafah is the only solution.

* Demand from the sincere military officers that they remove Hasina and transfer authority to Hizb ut Tahrir to reestablish the Khilafah Rashidah. This is the method of RasulAllah ﷺ ordained for us. You are aware that when the public opinion for Islam was established in the Arabian Peninsula, RasulAllah ﷺ presented himself to the tribes who had military power in Makka and its surrounding areas and asked for security and authority (Nusrah) to establish the Islamic state. Then, the Aws and Khazraj of Medina i.e. the Ansar (ra.), responded to the call of RasulAllah ﷺ and under the leadership of Saad ibn Muadh (ra.), they (ra.) established RasulAllah ﷺ in authority in Medina.

O Sincere Officers of the Military!

People are looking up to you that you will remove the tyrant Hasina and transfer the authority to Hizb ut Tahrir to reestablish the Khilafah, because only you have the military capability. Your responsibility is to stand on the side of Islam and the people, and not to protect the tyrant Hasina. March forth to be the like of Saad ibn Muadh, who was honored by Allah (swt) with great honor for giving Nusrah to RasulAllah ﷺ. RasulAllah ﷺ said:

“This (i.e. Saad ibn Muadh) is the one at whose death the Throne (of Allah) shook, the gates of Heaven were opened for him and seventy thousand angels attended his funeral,…” [Sunan An-Nasai]

“O you who have believed, respond to Allah and to the Messenger when he calls you to that which gives you life.”