23 March Pakistan Day Message: Led by a Khaleefah Rashid, Pakistan’s Armed Forces can turn the Security Situation of the Ummah Around 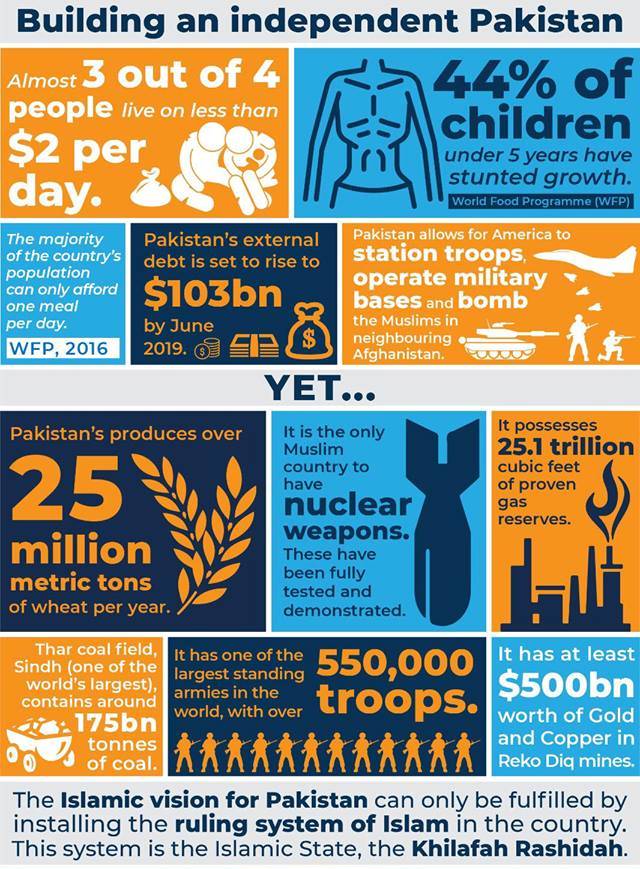 The sheer scale of the annual military parade for Pakistan Day confirms the might of Pakistan’s armed forces. It inspires pride within the Muslims and confidence within the armed forces that strengthen formidable material means with a burning desire for martyrdom. Truly, under an Islamic political leadership, ruling by Quran and Sunnah, our current declined security situation can be turned around rapidly and decisively. Rather than merely lamenting at India fomenting attacks from Afghan soil, an Islamic leadership would end the Indian presence in Afghanistan by removing its shelter and support, the US forces. It would close the land and air supply routes through Pakistan, which comprise the thread by which the US presence in Bagram hangs. It would round up US intelligence and private military in Pakistan, which are the eyes and ears for the US-Indian nexus. It would scramble JF-17s to render ineffective any US drones and seal the US fortified spy-post, masquerading as an embassy in our capital. Firmly rejecting talks to legitimize continued US presence in Afghanistan, an Islamic leadership would instead announce induction of tribal fighters into a trained paramilitary force, exposing those who are seduced to murder Muslims, rather than fight the enemy. And it would make ready its missiles, including tactical nuclear weapons, to deter any misadventure from India. Thus, an Islamic leadership can compel the unconditional surrender of the besieged and faltering US forces, a source of inspiration and effective template for more effective action from the Ummah over Occupied Kashmir, Syria, Yemen and Burma.

An Islamic political leadership alone can achieve security for Muslims because its source of guidance is the Quran and Sunnah and its foremost concern is the guardianship of the Ummah. So it will tear up destructive alliance with the enemy, for Allah (swt) commanded,

And it will seek strength through unifying the current Muslim states, rather than allying with the colonialist powers, for Allah (swt) said,

O Muslims of Pakistan’s Armed Forces! For too long we have suffered at the hands of a leadership that throws scorn upon Islam and calls to misguidance. It has only ensured our poverty, despite our immense resources, and humiliation, despite our power. You have the full support of Allah (swt) and Duas of the Muslims to turn the situation around. So, come forwards now and grant Nussrah to Hizb ut Tahrir for the re-establishment of the Khilafah (Caliphate) on the Method of the Prophethood. Allah (swt) said,

“If Allah helps you, none can overcome you; and if He forsakes you, who is there after Him that can help you? And in Allah (Alone) let believers put their trust.” [Surah Aali-i-Imran 3:160]