28 Rajab, Fall of the Khilafah: Let us Restore our Shield, the Khilafah (Caliphate) on the Method of the Prophethood 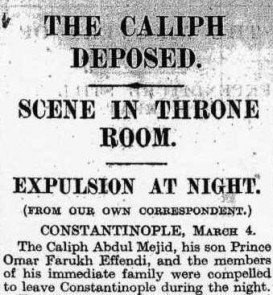 “Exalted is He who took His Servant by night from al-Masjid al-Haram to al-Masjid al- Aqsa, whose surroundings We have blessed, to show him of Our signs. Indeed, He is the Hearing, the Seeing.” [Surah al-Isra 17:1].

And our Master Muhammad (saaw), who made the Night Journey (Israa) in this month of Rajab, said that the Imam that rules by Islam, the Khaleefah, is our shield. RasulAllah (saaw) said,

“The Imam (Khaleefah) is but a shield, behind whom the Muslims fight and by whom they are protected.” [Bukhari and Muslim].

O Muslims of Pakistan! What a great calamity when we lost our shield! On 28 Rajab 1342 AH, corresponding to 3 March 1924 CE, our shield, the Khilafah, was destroyed by the British colonialists, with the collaboration of traitors from the Arabs and Turks. Without our shield, the Western colonialists violated our lands, plundered our wealth and then divided us into over fifty states. Without our shield, the treacherous rulers granted the Jews an occupying entity in the lands of Israa’ and Mi’raj and became a protection for it. Without our shield, al-Masjid al-Aqsa cries for liberation, with no Salahudin to hear and respond. Without our shield, we are slaughtered in Palestine, Occupied Kashmir, Burma (Myanmar), Afghanistan, Iraq, East Turkestan and Syria and other bleeding lands. How true are the words of the Companion of RasulAllah (saaw), Hanthalah (ra):

“I am astonished by those people, who desire the destruction of the Khilafah. If it were to come to an end, so would the Good upon them, and after it they would meet with severe humiliation”!

O Muslims of Pakistan! Enough of rulers who care only for thrones and more opportunity to loot us and then humiliate us before our enemies! Enough of rulers who do not act as shields, but as swords at our necks! It is high time that we struggle for the re-establishment of our shield. Let us earn the opportunity to see the glad tidings of RasulAllah (saaw) of the end of the oppressive rule and the return of the Khilafah (Caliphate) on the Method of Prophethood. RasulAllah (saaw) said,