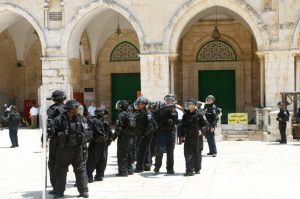 A source coming from the ministry of religious affairs mentioned that the announcement will be made in respect to the twinning between the captive Masjid Al-Aqsa in occupied Palestine and the Uqbah Bin Naafi’ Masjid in Al-Qayrawan. That will be done during a huge demonstration that will be organised by the Ministry of Religious Affairs on the 27th night of Ramadan on the 1450thanniversary of the revelation of the Qur’an Al-Kareem, which will be supervised over by the Prime Minister Habib Essid and attended by thousands of guests from Tunisia and outside, and prizes will be handed out during it to the winners of the memorisation of the Qur’an Al-Kareem competition.

In light of this fallacy by which the Tunisian government is seeking show its concern for the blessed Masjid Al-Aqsa whilst overlooking the central issue that has preserved the blessed land which is none other than the Islamic Khilafah, through the absence of which Palestine was lost, in light of this, we would like to draw the attention of those gathering to the following matters:

1 – The twinning of Masjid Al-Aqsa with the Uqbah Bin Naafi’ Masjid means that they are twin brothers and that indeed they are living or experiencing resembling circumstances. That is because the first is suffering under the Jewish Entity’s occupation whilst a pathetic authority claims to represent it which protects the security and peace of the occupation whilst considering security coordination with it a sacred duty. And the second suffers under the sway of the secularists who have stripped it of its role in respect to motivating the Muslim armies to retake what has been usurped from the lands of the Muslims, at the forefront of which is the blessed land. These two brothers have one mother and that is the Khilafah, whilst these two authorities fight against this project as they wish to shape the Deen to become a servant to secularism and to the separation of the Deen from the life.

2 – Masjid Al-Aqsa is not awaiting the statements of the foolish and shallow rulers nor are they awaiting the decision for its twinning with the Uqbah Bin Naafi’ Masjid… Al-Masjid Al-Aqsa seeks to awaken the determination and intent of the believers and it cries out to the Muslim armies to eliminate the Jewish entity, uproot it and restore Palestine, its people and Masjid Al-Aqsa to the folds of the Islamic Ummah.

3 – Verily, it was the Khilafah State that protected Palestine from the covetous designs of the invaders. And all of us remember the honourable stance of the Khalifah of the Muslims Sultan Abdul Hamid the second when confronting the covetous designs of the Jews in regards to Palestine when he said to them: “Verily the work of a scalpel in my body is lighter to me than conceding to you one hand span of the land of Palestine” and he added saying: “If the Khilafah State was to fall one day then you will take Palestine for free”. That is then what happened and so the Jewish entity would not have come about upon the land of Palestine had the Muslims had a Khalifah and no one will ever restore Palestine and Masjid Al-Aqsa to the domain of Islam except a Khalifah who is given the Bai’ah (pledge) upon the Kitaab of Allah and the Sunnah of His Messenger. And verily Masjid Al-Aqsa is calling out to the Islamic Ummah and the armies to establish the Khilafah and liberate the blessed land.

“O our people, respond to the Messenger of Allah and believe in him; Allah will forgive for you your sins and protect you from a painful punishment”