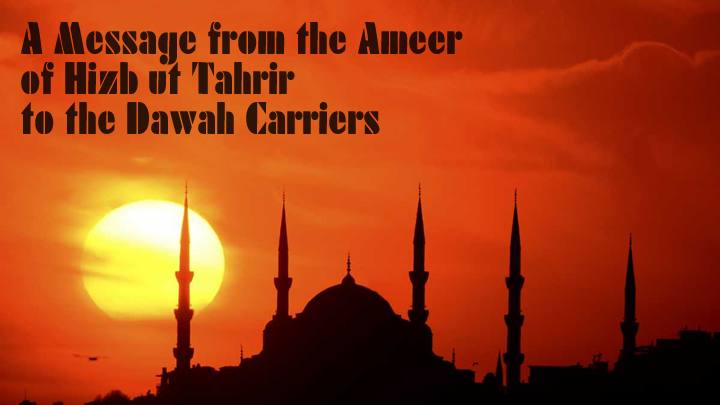 Praise be to Allah and prayers and peace be upon the Messenger of Allah and his family and Companions and those who follow him,

I have already written to you, brothers and sisters, “Here, I do not want to prevent you from acquaintance with these dark pages, instead I neither order you nor forbid you. However, what I order you emphatically is that do not send me any of those dark pages. I want to occupy myself with advancing in the good and straightened path, so that the caravan carrying the torch of light which heralds its bode, the Khilafah Rashidah by the permission of Allah at the time that Allah has prescribed and fixed. And for every matter is its determination… I pray to Allah (swt) that this will be near.

“Indeed, Allah will accomplish His purpose. Allah has already set for everything a [decreed] extent” [At-Talaq: 3].”

And I would have liked that you do not be preoccupied with the responses to those people, who are like insignificant whenever you turn it and view it you give it life and it distracts you from what is good… But I knew that you do respond to them frequently!

I know that you were responding to them to show their fabrications and their falsehood, perhaps your answer explains to them the truth, and they will benefit from the answer and abstain from their sin. But that if they say this slander out of ignorance and not intentionally, however, they say these lying, deliberately and intentionally, as their kind did before so they fabricated. And they wanted an answer and a reply, so we said to them at that time: (the one who said these slanders is one of two: one says it deliberately and intending to lie and this did not say it wanting an answer to benefit him, and another says it as he lost sight and foresight and this one does not benefit him the answer), for these are similar to their kind before them.

I also realize that you were responding to them for fear from their fabrications to have influence on the party, inflicting harm on it, or influencing the leadership of the party when they acquaint with their black pages, and this is not going to happen with the permission of Allah:

– As for their influence on the Hizb, it has been attempted by those who are more powerful and more united. The Kaffir colonizers tried to do so, their unjust agents tried, and the apparatus of these and the intelligence of those have tried, yet they all lost their wager and they died in their rage, while the party is still standing, upright on the Truth unharmed by those who failed it, nor by those falling from the caravan, advancing the march without weakening or declining, but in a straight path that is not deviant, with the permission of Allah, the Exalted in Might, the Wise.

– As for the leadership of the Hizb, it is firm on the Truth, by Allah’s permission, its resolve does not weaken nor does it decline, rather it rises from high to higher, not affected by any fallen or weak one, rather it is assured that victory is coming to it, by Allah’s permission, but at the hands of good righteous men like the companions of the Messenger of Allah (saw), because victory will be Khilafah (Caliphate) on the method of the Prophethood, i.e. like the first Caliphate, which was established at the hands of those honorable companions, may Allah be pleased with them. So, whenever those in whose hearts a disease fall of the march, victory becomes near, with the permission of Allah.

So, do not fear for the party or its leadership from those, neither the crowing of their seniors nor the bleating of their juniors, as the Almighty said to His Messenger,

“Indeed, We are sufficient for you against the mockers”. [Al-Hijr: 95]

We are reassured that Allah will suffice His servant believers against the evil of the mockers, the slanderers and the liars. And Allah is the Powerful, the Exalted in Might, and He (swt) is an ally to the righteous.

What protection stands before the protection of Allah the Avenger, the Compeller… and His (swt) saying:

“Surely We do help Our messengers and the believers in the worldly life as we as on the Day on which witnesses will stand (to give their testimony).” [Ghafir: 51]?

So, Allah does not only support His messengers, but also

And the victory is not only,

i.e. in the Hereafter, by approval from Allah and Gardens of Paradise, but also

“in the worldly life”

by glory and empowerment … So not despair of relief from Allah, O brothers and sisters, no matter how hard it may be, for the hardship is a foreshadowing of relief and the darkness of the night is a sign of the dawn:

Then going back to where I started, as I told you “do not send me any of those dark pages”, for I like you not to be preoccupied with responding to them, and they are lesser to you than that, so occupy yourselves with the cause of the Dawah and raise it high, and leave those in their falsehood, wondering blindly…

Fill in your [social media] pages to raise the issue of the Dawah … fill your pages with what move the work forward … fill your pages with what benefits the people … fill your pages by exposing the plots of the Kaffir colonists, their unjust agents and their intelligence who pursue the sincere servants of Allah… Do not become preoccupied with the matter of those insignificants for they are lower than to be preoccupied with them, and do not be fooled by the numbers on their pages, as one of them writes the number (one) and then puts many ones to look like eleven or one hundred and eleven! However, whatever they are, we thank Allah that none of them is an active member of the party. They are either a Nakith (one who broke the oath) or left (the party) or being disciplined, or a hypocrite who shows the party’s love and praises it, at the same time, he consumes the orphan’s money and plot against the party, its leadership and all its officials. All of these are evidences of the serenity and purity of the party and the firmness of its leadership in obedience to Allah Almighty and His Messenger (saw), and we do not commend any one to Allah.

In conclusion, here are two words whoever comprehend them will be aware of his end where it will be:

The first is to the colonists, their agents and intelligence:

That they should not rejoice by this sedition (Fitnah) that has taken place, and it is not far from their fingers and threads, whether they are the weavers who had woven and made them with their hands, or did not, but threw their nets and threads which were picked up by those who lost sight and foresight, and so it was what it was… I tell them not to rejoice by their sedition, for Allah the Compeller, the Avenger of the evil people, is in observation,

“when they rejoiced in that which they were given, We seized them suddenly, and they were [then] in despair” [Al-An’am: 44].

And if those evil people were wise, they would have taken lesson from the events of breaking the oath, as the party after which has grown in strength and support, but they do not understand.

The second is to the makers of Fitnah: In a conversation with some of my companions around them, it was said that some of these deserve to be dismissed, and this is true. However, I preferred for it not to be, and to be sufficed with them being punished by being totally ignored that is known of their punishment. For they may refrain, repent, seek forgiveness and return the orphan’s money which they have betrayed; to return it to its owners … Even though all this is far more likely for the people who are prone to deviation and sedition, but

“To be absolved before your Lord and perhaps they may fear Him” [Al-A’raf: 164].