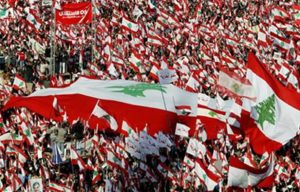 Yesterday, the lovers of the Lebanese entity and traders of it, celebrated the so-called “Independence Day”.  Many of those who celebrated, were celebrating on the basis of the deception and hypocrisy namely the consensus on national loyalty, and the fact that Lebanon is composed of multiple loyalties, mostly are loyal to their sect, whether it is exclusively within the Lebanese geography or it is across its borders.

And we, in our capacity of being loyal to the Islamic Ummah, which does not recognize geographical borders, nor nationalism, or patriotism, or sectarian, or division of religious schools of thought, we do not do allow for ourselves, nor for others, to participate in the traditional Lebanese celebration of deception since 73 years ago.

And it is important to us to recall a historical fact, which is the most important in the reality of Lebanon:

The so-called “Lebanon” today, which was established in 1920, did not exist prior to that date, but has always been – and remains – a part of the land of Ash-Sham (Levant), which became part of  Dar ul-Islam (Islamic Land) since the time of the righteous Khalifah (Caliph) Omar Ibn Al-Khattab, may Allah be pleased with him,  more than 14 centuries ago.

The other historical facts, that we do not have space to mention in details, and are known to the youngest student studying history in the Lebanese public schools, they are the ones that starkly pronounce as a whole that the Lebanese entity is a colonial product, and specifically French – British (everyone knows that it is a country based on international, regional, and abhorrent sectarianism balances). The French Mandate created it and created its French constitution and supervised its elections, and then Britain sponsored the leaders and their declaration of independence, then Lebanon moved from British to the actual American sponsorship in the mid-eighties, amid its vigorous attempts before that, this sponsorship that sometimes links it to Egypt and other times to Syria and finally to Iran.

And it shifts the loyalty away from the loyalty to Allah that He سبحانه وتعالى obliged on the believers by saying:

“The believers but are brothers”

To shift the loyalty to patriotism created by the artificial borders drawn by Sykes and Picot and their partners, the delegates of the European colonial nations, it is a celebration that angers Allah سبحانه وتعالى and His Messenger.

The duty of the Muslims in Lebanon and the Islamic Ummah in general, instead of celebrating these painful  shameful events, they must denounce the cartoon entities set up by colonialism in the land and to establish the entity of Islam, the righteous Khilafah state which resumes the Islamic way of life,  and destroys the artificial political borders, and unite Muslim countries, and takes care of their affairs by Shariah law, so that it returns as it was in the past, the most powerful state in the world, and the  carrier of guidance and civilized leadership to the whole world.

“You are the best nation produced [as an example] for mankind. You enjoin what is right and forbid what is wrong and believe in Allah”