No Welcome to Tillerson the US Secretary of State of Terrorism, Crime and Colonization of America 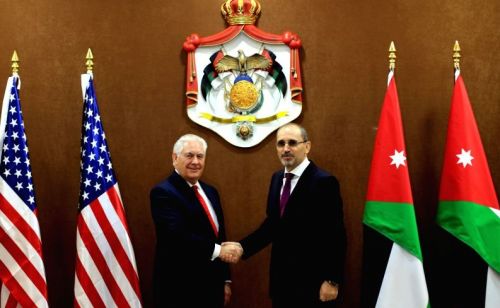 US Secretary of State Rex Tillerson, on Wednesday February 14, 2018, arrived in Jordan in a rejected and absolutely unwelcome visit by Muslims in Jordan for their undoubtable certainty that America, the enemy of Islam and Muslims, aims to tighten its control over the country and extend its full colonial influence after tying it to its wheel through the economic and military aid that led to the impoverishment of the country and the instigation of chaos and turmoil in it and enabled its colonial economic tool, the International Monetary Fund (IMF), to control it in favor of America and its colonial objectives that are no longer concealed on any one in this world. No two Muslims in Jordan and the world disagree that America is the enemy of Islam and Muslims, and that it is a state that has done and continues to carry out all forms of terrorism and criminality in more than one place in Muslim countries, and that it is a malicious colonial state that does not hesitate for a moment to use all styles and means to exploit peoples and exert its influence and control.

America’s policy towards Jordan, before and after the regime in Jordan has been subjected to it, is a malicious colonial policy to exploit the Jordanian people and drag it to its colonial fold. The economic and military assistance provided by America today to Jordan is only one of its malicious colonial policy to extend its economic and political control over it and destroy the will of the people of the country, as it will attract the people of the country to enter under its control, by the regime’s submission and its hiding of the real objectives of the aid, and by misleading which will embellish the goals of this aid, which will be practiced by America along with the colonial trumpets of politicians and media in Jordan and abroad.

The whole world have heard the threats of US President Trump that he will cut aid to countries that oppose and reject his decision to recognize Al-Quds (Jerusalem) as the capital of the Jewish entity, and we all heard the statements of US Vice President Pence that America will commit to aid Jordan and economically support it if it followed the American plan to resolve the Palestinian issue (the deal of the century). Today, US Secretary of State Tillerson comes to Jordan to sign the memorandum of understanding on the subject of aid, thus, a bird is known by its song.

Do not let America get control of your country and do not enable it to complete the empowerment of the Jews on the blessed land of Palestine. So, do not lean to the Earth and thus America enslaves you and then targets your religion, your values and your holy places and plunders the wealth and the riches of your country which the regime has prevented from you. You are able to prevent the loss of the country, and you are able to account the regime in Jordan a legitimate political accountability that compels it not to enable America to take control of you and your country.

“And Allah will never allow an authority to the disbelievers over the believers” [An-Nisa: 141].