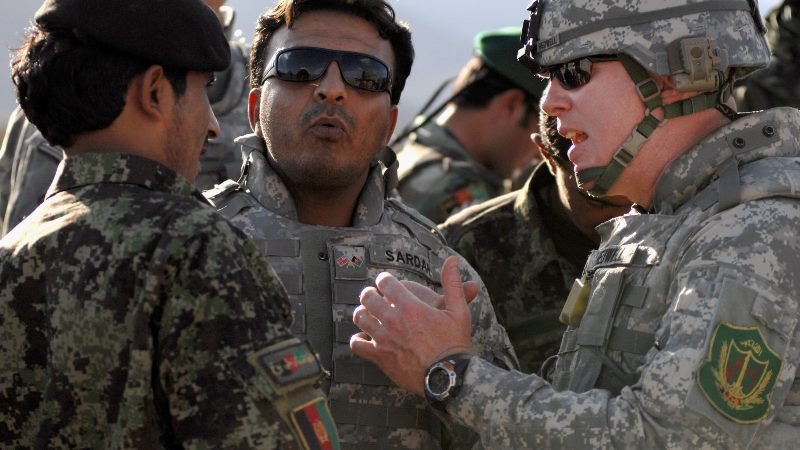 After US talks with some elements of the Afghan Taliban extended into their second day in the Gulf, Pakistan’s rulers were not able to contain their pride at their facilitation of the talks, which they gave just after one demand letter from Trump. On 18 December 2018, in a tweet from his official Twitter account, Imran Khan reiterated that his government will do all they can to “further the peace process.” As for General Bajwa, he basked in the praise of the US Special Representative for Afghanistan Reconciliation, Zalmay Khalilzad, who visited him on 19 December 2018 and appreciated Pakistan’s efforts for the Afghan peace process. However, the Bajwa-Imran regime’s gaudy self-congratulation and back-slapping is completely misplaced. Indeed, its facilitation of talks are not a source of pride and permanent peace, but of shame and lasting insecurity.

Economically and militarily exhausted after its misadventures in Iraq and Afghanistan, the United States is desperate for a political deal to secure the permanent presence of its private military and military in Afghanistan. Brought to its knees by a poorly equipped but highly determined Afghan resistance, America is in need of talks to secure its presence in an immensely resource-rich land that its Pentagon regards as the “Saudi Arabia of lithium.” With its own troops committing suicide through the fear of war, the US is desperate to win on the negotiation table, that which its unworthy troops could not earn in seventeen years on the battlefield. Desperate to shore up its despised and waning influence in the world, America is dependent on Pakistan’s facilitation to remain permanently stationed in Afghanistan, so that it can supervise the growth of the US-Indian nexus, as a counter to China and the world’s only Muslim nuclear power.

In such a favourable situation for Muslims, instead of extending the rope of talks to save the drowning US occupation, it was upon Pakistan’s military and political leadership to allow the US to die its own death in “the graveyard of empires.” Instead of extending intelligence sharing to the US, Pakistan’s rulers should have left it blind so that it could not identify, target and assassinate those sincere Taliban commanders who remained true to expelling the crusaders through blessed Jihad, rather than demeaning themselves by participating in talks to save an enemy on its last legs. And instead of maintaining the essential NATO air and land supply lines, Pakistan’s rulers should have let the US forces starve, so that they would have followed the disgraced troops of Soviet Russia and the British Empire in humiliating and complete withdrawal, learning a hard lesson and never daring to return.

O Muslims of Pakistan! The US conspiracy against us is unfurling to its full height and it is not too late for us to foil it, even now. As for the Bajwa-Imran regime, instead of siding with us, it is collaborating with those that seek to harm us and our Deen. It is a lowly regime that demonstrates incompetence and neglect when it comes to looking after our affairs, but springs to life in ruthless efficiency when coming to the aid of its wounded masters in Washington. It is a regime that walks the treacherous path of all the previous US agents, by portraying US requirements as if they are ours. So when the US needed war, they portrayed that war as our war. But now when the US needs a deal to stay, they denounce war and portray surrender as our peace. They play double games with us, our intelligence and armed forces, but the day is not far when they realize that they have deceived themselves. Allah (swt) said,

“They [think to] deceive Allah and those who believe, but they deceive not except themselves and perceive [it] not.” [Surah al Baqarah 2:9].

So, let us turn away from rulers that deceive and betray us and raise our voices with the advocates of the Khilafah in firm rejection of the US alliance and its latest conspiracy of talks.

O Muslims of Pakistan’s Armed Forces and Their Intelligence! The US conspiracy against us is unfurling to its full height and it is not too late for you to overturn it and force the US-Indian nexus into retreat. It is your intelligence that gave sight and insight to the Afghan resistance, enabling them to end the Soviet Russian occupation with such force that it contributed to the collapse of Soviet Russia itself. With the Help of Allah (swt), which is extended to those who obey Him (swt), you can now strike a blow that will contribute to knocking the unsteady United States off its very feet. It is upon you now to openly and actively encourage all elements of the Afghan Taliban to firmly reject talks and commit fully to the path of honour in this Dunyah and Aakhira, Jihad.  RasuAllah ﷺ said,

“No people abandon Jihad except that they are humiliated.” [Ahmad].

And it is upon you to cut the NATO supply lines, seal the US spy posts disguised as an embassy and consulates and expel all US private military and intelligence from our soil.

You are the mighty lions of the Ummah that can strike at our enemies and send them scurrying in fear. Your enemies are in awe of you, tread carefully around you and spin webs of deceit, so as not to invite your anger. Unleash yourselves by relieving yourselves of a treacherous military and political leadership that advances your enemy in its plots, against the noble people that you have sworn before Allah (swt) to protect. Honour yourselves in the good pleasure of Allah (swt) by granting the Nussrah for the immediate re-establishment of the Khilafah (Caliphate) on the Method of the Prophethood, so that you are led as you deserve to be led, in the pursuit of martyrdom and victory. Allah (swt) said,

“Be not weary and faint-hearted, crying for peace, when you are the uppermost: for Allah is with you, and will never put you in loss for your (good) deeds.” [Surah Muhammad 47:35]