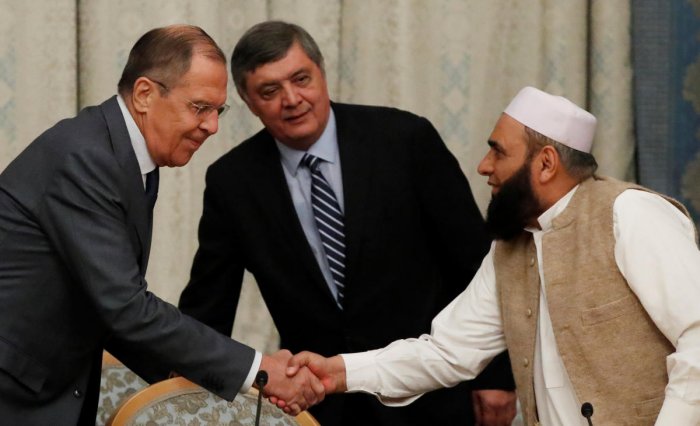 The destructive 18-year war waged by the US under the pretext of “War on Terror” launched against the Muslims of Afghanistan has reached a serious stalemate. It is impossible for the US to make a sudden exit and retreat, because such a retreat will have the same consequences like that of the former Soviet Union, i.e. the civil war of the 90s and all its consequences.

As a result, after half of a century of political relations with Afghanistan, and struggles in political, economic and intelligence areas, sustaining trillions of dollars in expenditure and sacrificing thousands of soldiers for the occupation of Afghanistan over the past 18 years, America has now returned to peace talks with the Taliban for fear of humiliating defeat. Apparently, the objective of these peace talks is to end the war in Afghanistan while at the same time ensuring the colonial influence of America, to fully exploit the geostrategic location, natural resources and money generation from narcotics.

It is said that, it is a matter of pride for an armed Islamic group that the world’s leading power has been forced to sit at the table for peace talks with it. This comes at a time when this group has been named as “terrorist” by the foreign policy establishment of this leading world power, who waged war under this deceptive pretext… However, if the negotiations were to lead to the uprooting of the US influence from Afghanistan militarily, politically and economically, it is unlikely in US policy except it were forced upon it.

Joining the US Peace Process by Afghan political and military groups will in fact lead to a gradual submission and surrender to occupying enemies of the country, to further disintegration and fractioning of the Taliban and to deceiving the Muslims of Afghanistan.

There is no doubt that the true desire and demand of Islam and Muslims of Afghanistan is the total withdrawal of all occupation forces from the country, the elimination of the democratic system and complete implementation of Sharia. This objective is not pursued by Muslims of Afghanistan alone. Rather the entire Muslim World demands the immediate elimination of the existing puppet systems and governments, freeing occupied lands, the elimination of every trace of occupation forces from their lands and the implementation of Sharia through reestablishment of Khilafah (Caliphate). Armed groups in the occupied lands and the Arab Spring is the most vivid manifestation of the will and resolve of the Ummah for freedom. The question however is, can this goal be achieved through negotiations with occupying forces?

Not at all. Had this been possible, the Islamic Movement of Tajikistan would have achieved this goal through making peace with the puppet and dictatorial regime of that country. The revolutionary and liberation forces of Syria would have reached this goal by negotiating with the occupying Russian, Iranian and Turkish forces. Chechen Muslim, or even Hizbi Islami of Gulbuddin Hekmatyar in Afghanistan would have achieved this goal. These groups merged in Kufr democratic processes, and subsequently the colonial programs absorbed them and their objectives. As a result, their only achievement was further disappointment and reinforcement of Kufr systems on the Muslim Ummah. Does the Taliban movement want to follow the example of these groups?

Also, throughout its history, America is notoriously famous for breaking its promises, not only with armed and political groups but also with states. If this fact is hard to accept, ask former Northern Alliance’s leaders and leader of Hizb-e Islami in Afghanistan, ask the leaders of Iran and North Korea. And ask UK leaders what they did in BREXIT. Pragmatic American policy does not have permanent friends, nor does it have permanent enemies. For America, its colonialist interests justify its dirty means. To occupy Afghanistan, first America declared you as terrorists and brought down your government. Now after many years of war and destruction, and due to requirements of changed circumstances in American foreign policy, it has dropped your names from the UN 1267 Terrorists List, now labeling you as internal insurgency. As such, the US has opened the doors of negotiation with you to guarantee the safety and continuity of its colonial presence.

The reality of war in Afghanistan before 2014 was such that people of Afghanistan were in direct clash with foreign forces and their allies. However, after signing shameful Bilateral Security Agreement (BSA), the war shifted to a bloodshed between people of Afghanistan resulting in localizing the US war. Ever since, the occupiers have rested in safety in their bases, leading the war between people of Afghanistan as advisers, trainers and supporters, and by equipping and financing Afghan forces. As such, they are playing an ugly role while keeping their safety and security. Strange militant groups have also emerged who commit notorious actions in the war. Sometimes this war turns into a complete Fitna (trial and torture) between Muslims on tribal and ethnic bases, and sometimes it changes to a war for control of drug trade corridors, and yet other times, its nature shifts to that of a proxy war of countries who have interests in Afghanistan and in the region.

In fact, the people of Afghanistan bear the true cost of this war. This situation casts doubts on the true nature of struggle of sincere people, and Colonialists take full advantage of it.

O Sincere Members of the Struggle in Afghanistan!

Getting an inch closer to Kuffar of occupation is going farther from the truth. If you open the doors of negotiations with occupying forces and continue this approach, it will lead to your gradual deviation. This approach will eventually merge you in the American process. This will come at a time when you are not aware of your deviation and are not even willing to accept it. As a result, even if Kuffar end their direct occupation, they will continue their colonialist policies through international institutions, embassies, diplomats, spies and civil institutions etc. in that case, the warning from Allah (swt) which was given to the people of cave will suit our situation as well.

“Indeed, if they come to know of you, they will stone you or return you to their religion. And never would you succeed, then – ever.” [18:20]

There is no doubt that if direct armed struggle against occupiers in Afghanistan is ceased, the Kuffar will humiliate us ever more and will force us to accept their most corrupt and cheap laws. As a result, we will have brought upon us the loss of this world and that of the Hereafter by forsaking your struggle against the occupation, by neglecting the intellectual and political struggle against them and the work for implementation of Islam through establishment of Khilafah.

The peace process with the enemy will not bring you the level of security and progress that you wish for. Rather, this process will only make the situation of war and politics in Afghanistan ever more complex, and the occupying forces will increasingly strengthen its military, political, economic and cultural roots. After the abandoning of struggle against occupiers, Muslims of Afghanistan will not be able to mentor or protect their wives and children, and every humiliation will fall upon every individual Muslim of this land. In Afghanistan – like some other Islamic countries – it will not be possible for people to give Islamic up bringing to their children, establish a family through the Shari’i process of Nikah (wedding), perform prayers, give political khutbas (sermons) in Mosques and carry out the Islamic Political struggle in the society.

America wants to declare the end of its longest war in history so that the ruling American party could use it to win the parliamentary elections. On the other hand, it wants to deceive countries of the region by pretending to end the war in Afghanistan. As a matter of fact, America wants to prevent its shameful and clear defeat in this grave of empires. Surprisingly, in this peace process, peace is not the agenda with the twenty other terrorist groups whose names are consistently mentioned by American politicians and their installed puppet leaders in Kabul. Therefore, it is expected that Afghanistan will remain America’s war-project in the region. After the materialization of this ugly and deceiving process, only the geography of war will change; and America will continue the exploitation of Afghanistan’s geostrategic location, natural resource and drug trade.

It is worth mentioning that cooperation and facilitations extended by Pakistan, Saudi Arabia, Emirates and Qatar in this process do not mean that they sympathize with the Taleban or that they are sincere to the group. Rather, these states are cheap American means to influence the Taliban. Also, cooperation from China, Russia, India and Iran with warring sides (Taliban and America) further complicates the situation, and conforms to the reality of regional dimensions of the war and the fact that there is also a war of proxies going on in the country, and that America wants to transfer the burden of war to the shoulders of other countries. In 2001, Pakistan made a deal with America over the collapse of Taliban government and occupation of Afghanistan. Now again, Pakistan is preparing the grounds for the repeat of that conspiracy and that deal. It is thus, America is using all its strategic tools to put pressure on Taliban and influence them to submit to American peace process.

O sincere people of Ummah within the Taliban Movement and other Islamic groups!

The objectives of struggle and sacrifices of your ancestors against Britain, and your objectives and sacrifices against former Soviet Union and against America had not been and is not to strengthen the roots of Democratic system and man-made laws. Rather, these sacrifices have been given for establishment of the Islamic State and implementation of Sharia. Therefore, let us all say NO with one voice to the American peace process and to all other programs of Kuffar and their puppets- in words, and in action. Let us compliment the armed forces and armed struggle against the Kuffar with comprehensive and political thoughts of Hizb ut Tahrir, a party that can guide you step by step through the conspiracies and strategies of our enemies. Let us work towards the fruition of sacrifices of our brothers in the region by re-establishing the Khilafah Rashedah. Only then can we celebrate and enjoy in Afghanistan and in all Islamic lands the true taste of prosperity and security that comes from the confidence of Iman under the political culture of Islamic State. Only then can we work through the foreign policy establishment of the Islamic State to spread Islam to the world. Only then can the Muslim Ummah take the initiative away from Kuffar and lead humanity away from the darkness of Capitalist system to the light of Islam and Islamic system. Then,