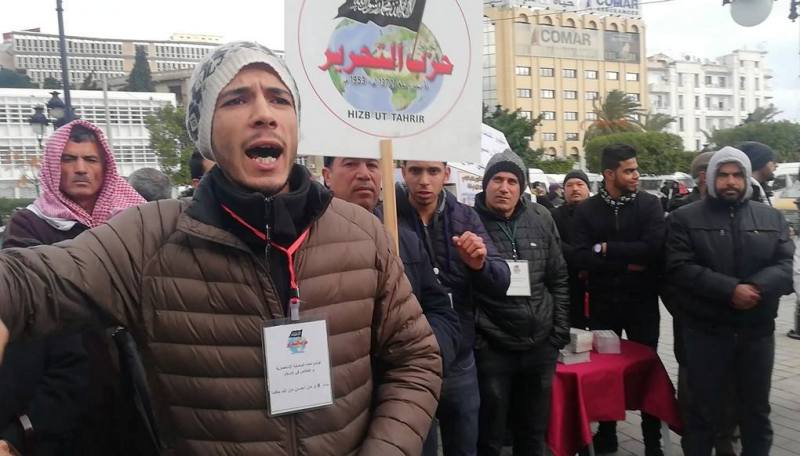 As the election campaign intensifies, the confusing question on everyone’s tongues is: Who do we choose? Do we participate in the elections or boycott it? If we boycott it, do we leave room for those who want to meddle and the corrupt to control us?

To illustrate this, we say:

The origin of elections is that it is a sovereign free choice of conviction and consent by which all electorate choose the persons entrusted with the implementation of the system or by persons entrusted with enacting the laws according to this system. Elections, however, do not reflect the true will of the general electorate, unless it is according to their creed and view of life.

Looking at the current elections in Tunisia, we see:

1- The creed on which the so-called selection process is conducted is the doctrine of separating religion from life, contrary to the Islamic creed of the electorate. Islam was separated from power by blatant and arrogant interference from colonial powers that mobilized their “experts” and envoys (since the beginning of the revolution), until they were assured that the political class (is secular and modified Islam) has abandoned Islam and removed it from the legislation and ruling, and thus the doctrine of the electorate was removed and a strange Western doctrine was imposed on them.

2- As for the System on which the electoral process takes place, it is represented by the man-made secular constitution (its stipulation was supervised by the United Nations (Club of Criminal Colonial States) and with the intervention of the European Union, whose president was keen to remove Islam and in coordination with Noah Feldman, the American Jew). Everyone remembers the IMF’s threats of not repaying the rest of the loan installments if the constitution is not ratified before 29/01/2014, and thus the democratic system was imposed and became sacred and untouchable or discussed.

3- As for the candidates, the first condition of their candidacy is that the colonizer accepts them; none of them can enter the race until he declares his loyalty and sanctity to the democratic system, and his position matches the relationship of Islam with the government, equality of inheritance and homosexuality, according to the European conditions. No one aspires to reach the « chair » until support comes to him from embassies or overseas.

These are the foundations of the elections in Tunisia: a doctrine contrary to the doctrine of the people of the country; A strange Western system imposed by coercion and cunning, and candidates according to European specifications. Can any sane person ever say that Tunisia has a real election?

What is really happening is a robbery of the will of the Tunisian Muslim people and pushing them for surrender.

Moreover, if we look at the general context of elections and wherever we direct our faces, we find the colonizer or one of its tools control the electoral process and supervise its smallest detail:

1- The amount of foreign interventions in Tunisia is no longer a secret in all parts of the state and the administration, and the political center in Tunisia (rulers and opposition) accept these interventions, but even see it as a necessity, which made Tunisia under the direct colonial mandate.

2- Dozens of Western observers came from the ends of the earth to observe the electoral process in order to ensure it  proceeds as set by the masters, so that it does not deviate from the planned course and so that the clever students of democracy do not ruin the professors’ program that they set for Tunisia.

3- Westerners generously drown the so-called civil society associations with funds to be its observing eye over everything. So they check the candidates’ movements and even their breaths, and observe every polling station, every statement, every website, and write detailed reports so that the Europeans are kept up to date with the finer details of the political scene (to control it).

Is this a real selection process or a described deception?

The current elections is a criminal robbery against the Muslim people who are forced through betrayal and plots to follow a doctrine contrary to their creed and impose a democratic system on them. Only those approved by the West will reach power, and we saw how Ben Ali’s ministers returned to the political scene. And it is not strange that we hear and see those who call for the return of Ben Ali himself.

This is how the colonizing West (the maker of Bourguiba and Ben Ali) works to regenerate its system and ensure the continuation of its hegemony over Tunisia, but rather the entire Muslim region. This time, however, it is a “revolutionary” hegemony that the elections have legitimized.

So what to do? This perplexing question is echoed by the sincere and faithful to their Deen, their Ummah and their country.

The solution is known, man’s work is not conscious and wise, and expressing his will except if it emanates from his creed, and you are Muslims who believe in Allah as your Lord and Muhammad ﷺ as your Messenger, whom the Qur’an was revealed to with the guidance, with the clear answer. Why then is there bewilderment? And why to question? Allah says:

Allah has obliged us to follow His noble Messenger ﷺ. He (swt) says …

“And whatever the Messenger has given you – take; and what he has forbidden you – refrain from. And fear Allah; indeed, Allah is severe in penalty.” [Al-Hashr: 7]

It was forbidden to submit to the Kuffar ...

“and never will Allah give the disbelievers over the believers a way [to overcome them]” [An-Nisa: 141].

O Muslims in the country of Zaytuna:

The only wise political action today is to establish Islam in a state that becomes the Khilafah Rashida  (Righteous Caliphate) on the method of Prophethood. It is a great work, and it is the work of the prophets. It carries a great reward from Allah (swt); it is enough pride for the Muslim to carry out the work of the prophets and be in the company of the companions of the Messenger of Allah, the first immigrants and supporters. The first step today is to liberate our country from dependency and humiliation; and get rid of this colonial domination by eliminating its tools:

2- The rejection of the capitalist democratic system that makes the strong eat the weak, and makes the whole life a hotbed of the whims of the forces controlling society with money and influence, and always does so in the name of the people and despite its wishes, by delusion and oppression. And the adoption of the system of Islam, which covers life and relations, and this is known in the Deen by necessity and no sane person disputes this, Allah (swt) said:

“And We have sent down to you the Book as clarification for all things” [Al-Nahl: 89]

3- Getting rid of the agents of colonialism and its lovers who serve it. Such people have renounced the Book of Allah and followed the path of criminals. Their natural place is the judiciary councils to be tried for handing over the country to its enemy, not the lists of candidates for senior positions in the state.

And know that this will not be achieved by merely boycotting the elections. To boycott only is a negative act that brings the feeling of helplessness and hopelessness, and a Muslim is neither helpless nor desperate. The first step to take is a strong effective action that starts with declaring the rejection of the electoral robbery, and to declare that this electoral process fundamentally invalid, invalid from its basis, its results are invalid, and does not represent the Tunisians. The electoral process is fundamentally invalid, and invalid in its results, and does not represent Tunisians. Let it be a declaration that the entire world will hear (as they have heard before, your expelling of Ben Ali). Then declare with this that you will not accept an alternative to Islam.

We address the people of power over us and say to them:

You are our people and our pride, and this is your country which you have sworn to protect. The enemy is controlling it and running its affairs as they wish. This is your submissive and disloyal political class. It has approved and allowed the enemy to take over and dominate it. These are your people and your Ummah, who you swore to protect them; they are led to a political process, which they claimed to be elections by misleading and plotting, yet it is only a robbery of the country. The people are taken hostage, tying them with poisoned electoral ink to steal from them an imagined legitimacy.

Do you accept and remain silent and become partners in the crime? Isn’t it your duty to liberate the country from its colonialists?

And we remind you: You are Muslims, believing in Allah (swt), as your Lord, Islam as a Deen and Muhammad as the Prophet ﷺ. You are strong by your Lord

“No power except with Allah”

Strong by your Deen

“And to Allah belongs [all] honor, and to His Messenger, and to the believers,” [Al-Munafiqoon: 8]

We invite you to the sincere call of Truth: to stand up firmly for Allah to remove with us these man-made regimes that oppress us in the world and lead us to destruction on the Day of Resurrection.