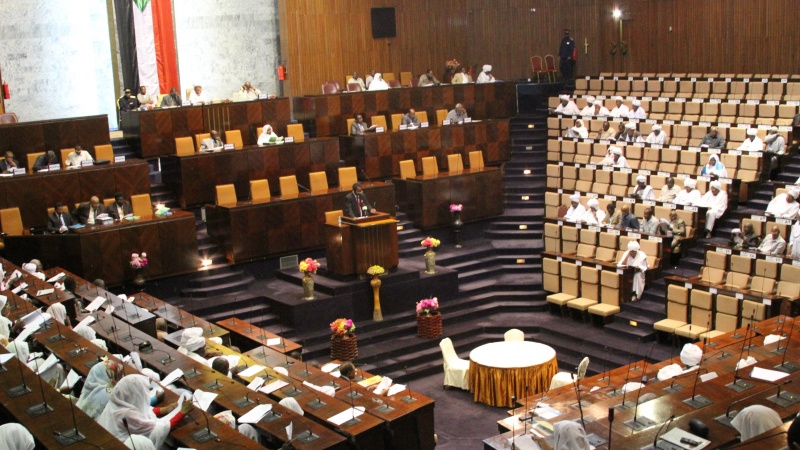 Amid cheers, Takbeers and chants (it is for Allah… it is for Allah), the Sudanese parliament passed on Wednesday, 21st November 2018, the Elections Law for the year 2018 with a majority (430) members and the withdrawal of 71 members representing about 34 political parties… This law had been in the corridors of the parliament for more than 5 months.

The election law stipulates that the voting period is three days for the election of the President of the Republic, the state’s governors, the National Legislature, state legislative councils and the local councils… and that the number of Members of Parliament shall be 380 deputies, and the Legislative Council of each state shall consist of 48 members except for the States of Khartoum and Gezira, which will have 84 members.

Regarding this law, Hizb ut Tahrir/ Wilayah of Sudan states the following:

– The election of a President of the Republic (Muslim or non-Muslim), (man or woman) on the basis of citizenship to achieve the principle of sovereignty of the people, who applies other than the systems of Islam and its provisions, this reality is forbidden according to the Shariah, because Islam obligated the election of a Khalifah (Caliph) to Muslims, to be just, male, Muslim who fulfils all the other preconditions, to apply the law of Islam, and governs the people by the provisions of the Lord of the Worlds.

– The election of state governors by the people of the Wilayah (province), which means that governors derive their authority autonomously, where the head of the State cannot remove them, but he is removed by the Legislative Council representing the people of the province, this reality is contrary to Islam, because the head of the State – the Khalifah of Muslims, is the one who appoints and removes the governors, as did the Messenger of Allah ﷺ when he became the ruler and head of the State. He ﷺ appointed Mu’adh as a governor (Wali) over Al-janad, Ziad bin Lubaid over Hadramaut and Aba Mosa al-Ash’ari over Zabid and Aden. He ﷺ was the one who removed Al-‘Alaa Bin Al-Hadrami, his Aamil (worker) in Bahrain, and removed Mu’ath bin Jabal from Yemen. Furthermore, the existence of rulers with autonomous authority in isolation from the centre of the State, gives the impression of the separation of the provinces and their emergence from the State’s authority, and this is what is meant to be codified through the so-called federal system.

– The election of members of the Parliament, the Legislative Councils, and the local councils to enact rules and legislations by the mechanical majority on the way of those who are astray; the Kaffir West, so that the state fiddles with the sanctity of the people with falsehood. This reality is contrary to Islam; because the legislation is taken from the great Revelation, the Quran and the Sunnah, and the source they refer to by the strength of the evidence, known by those who can draw correct conclusions from it, and adopted by the Khalifah of the Muslims as constitution or law.

This is the truth of the Election Law of 2018, which is an invalid law that contradicts Islam, because it enshrines the same false situations, which brought us to this low depth. And this law will not change anything, but it is a tool used by the rulers and the choir of the beneficiaries with them to continue in the chairs of the government with crooked angles.

The real change that Allah the Almighty has obligated upon us, the one which brings us back to the Islamic way of life, where Muslims elect a Khalifah and give him a legitimate pledge of allegiance to implement the provisions of Islam, and to carry Islam as a message of goodness and mercy to the worlds. For the like of this let all Muslims work, and for the like of this let the people of power and support give victory (Nusrah) to Hizb ut Tahrir to resume the Islamic way of life by establishing the second Khilafah Rashidah (righteous Caliphate) on the method of the Prophethood, that is returning back soon, with the permission of Allah.