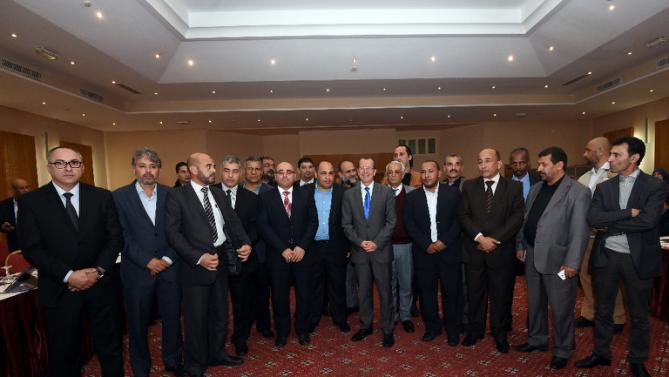 “But who, for a people whose faith is assured, can give better judgment than Allah?”

After eight years of revolution against injustice and tyranny, the country is still suffering a suffocating crisis at all levels … The main reason for these crises is that the regime of Ben Ali came out of the door and returned through the window, as the path of the secular political class and all the governments emanating from it (before and after the elections) was characterized by Western domination and the wasting of the country and the people. We have begun to hear in recent times, confessions from the political class of this hegemony, nonetheless their confession attributed the crisis to the individual ministers and turned a blind eye on the policies and programs that created the disaster. It is known that whatever is laid down in Tunisia of “constitution and laws” legislations, political programs and economic policies was under the direct supervision of the colonial European countries, the International Monetary Fund (IMF) and the World Bank. Whereas the Ministers throughout the successive governments had nothing to do except implementing and signing where they are told to sign. However, what all governments have successfully achieved is:

Whereas, the interests of the people and the facilitation of their livelihood and safety are the rulers’ last concern, they only consider people to be electoral figures that are taken care of a few days every five years.

O Muslims in the country of Zaytouna:

The “new” government is a modified version of the Bourguiba and Ben Ali regimes, attuned to the criteria of Britain, the European Union, the International Monetary Fund and the World Bank. This government was imposed by democratic deception to delude of the change, and instead of a one-party, there has been the involvement of the secular political class and the addition of the so-called “moderate Islamists” who were involved by the colonizer to implicate them all in the crime of placing Tunisia under direct colonial trusteeship.

O Muslims in the country of Zaytouna: O you who launched a revolution that shook the pillars of the oppressors in the east and the west …

We remind you that your glory and the glory of your people and your country is in your religion, your Islam, which Allah has honored you with, which holds the solution to all your adversities. We remind you of the saying of Allah (swt):

“Do they then seek after a judgment of (the Days of) Ignorance? But who, for a people whose faith is assured, can give better judgment than Allah?” [Al-Maida: 50].

And that the solution lies in the following:

We address our forces in the security and army in charge of protecting and preserving society, and tell them:

Your country has been seized by quasi-rulers and quasi-politicians who are marching it towards the abyss, and here you see today with your own eyes that these want evil and treachery for the country, so will you continue to protect them? Will you partake in their crime? We deem you far above to be submissive followers inclined where the leaders tend. Instead, your duty is to search for the sincere leadership, which represents your aspirations emanating from your creed, which imposes upon you that you be part of your people and your Ummah, and not part of a meagre governmental structure concerned with pleasing your enemy. You swore utmost oaths that you will be the protectors of your people and your country, and here your country today is a hostage to the colonist who abducted it by the treacherous traitor hands who disgrace themselves and sold it, and they will not hesitate using you to employ you as servants for the colonial firms.

And know that Allah Almighty has promised us victory and empowerment, and His Promise is the Truth; which is not only to the prophets but also to the believers. It is not only in the Hereafter with testimony, Allah’s pleasure and the Paradise, but also during this world with victory to be for the believers. Allah (swt) says:

“Indeed, We will support Our messengers and those who believe during the life of this world and on the Day when the witnesses will stand.” [Ghafir: 51]