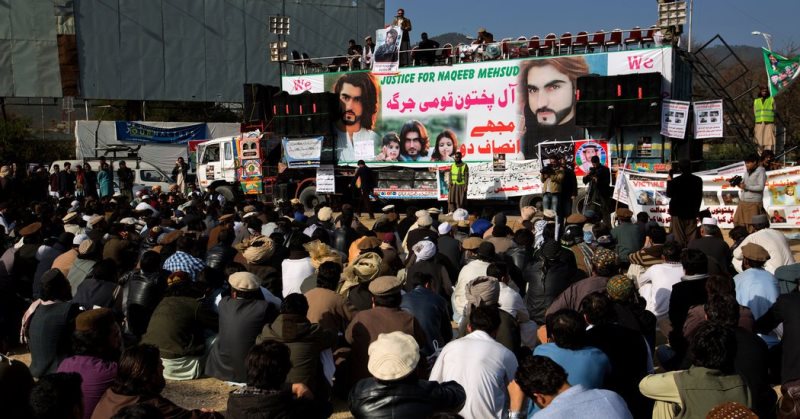 Despite being provided assurances by Prime Minister Shahid Khaqan Abbasi to hunt down and punish the killers of Naqeebullah Mehsud, Pashtun protesters have refused to end their sit-in outside the National Press Club in Islamabad. Having been abused by Pakistan’s rulers for decades, extending to extrajudicial killings and abductions for the sake of America’s crusade, the recent tipping point for Pashtun tribal Muslims came with the staged killing of 27-year-old Naqeebullah Mehsud in Karachi in a “police encounter.”

Due to the rulers allying themselves to the US, the dignified Pashtun Muslims have been dehumanized, uprooted from their homes and collectively punished purely for their principled rejection of the US invasion of Afghanistan. The rulers have preferred the law of Washington over the Law of Allah (swt) on every occasion. Islam has granted sanctity to the life of each and every Muslim, loyal servant of Allah (swt). Allah (swt) said,

“And whoever kills a believer intentionally, his Recompense is Hell to abide therein, and the Wrath and the Curse of Allâh are upon him, and a great punishment is prepared for Him.” [Surah An-Nisa 4:93]

Islam has forbidden the harassment and persecution of the Muslims. It was narrated from Anas that RasulAllah (saaw) said,

“Whosoever terrifies a believer will not be secure from being terrified on the Day of Resurrection.” (Kanz al-Ummal).

In Islam, it is unlawful for the authority to become a force and rule by domination and suppression. This is because in Islam, the ruling includes the search for truth in matters, the restriction to the Shar’a and the fulfilment of justice. Yet, presiding over an American state that is intellectually bankrupt and militarily and economically exhausted, Trump has ensured his agents in Pakistan use force to suppress Muslims and their Deen, through a police state.

Muslims must end the rule of oppression and tear up the US alliance for injustice, by working earnestly for the end of the rule of force and replace it with the Khilafah (Caliphate) on the Method of Prophethood. RasulAllah (saaw) said,