Enough Western Colonial Dictates. Yes to the Righteous Khilafah State (Caliphate) on the Method of Prophethood 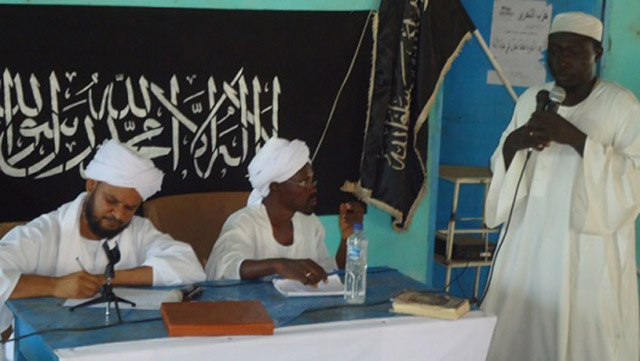 In the past three days, the US Deputy Assistant Secretary of State for African Affairs Makila James has held a wide-ranging round of talks in Khartoum, where she met with the President of the Military Council, Abdul Fattah Al-Burhan, in addition to the leaders of the Forces for Freedom and Change and informed them that Washington’s priority is to see a civilian government In Sudan. After these meetings, an agreement was reached between the military council and the forces of the Declaration of Freedom and Change to form a joint committee of the two sides to reflect on the arrangements for the transition.

Makila, who was a member of US State Department policy planning, explained that her visit comes to assess the situation on the ground. (As-Sudani 26/04/2019).

We do not need to work hard to define America. It is a colonial state with ambitions in our country. It is the enemy that has killed millions of Muslims around the world, its hands are stained with the blood of the unarmed innocent sons of our Ummah; it helped the former regime kill our people in Darfur. Its treasury is packed full with the Ummah’s wealth; of the oil, gold, Arabic gum, etc., instead of this wealth being used for the liberation of our will, strengthening to our dignity, removing of former regimes in our lands, and uprooting them forever, it allows the way for enemies again, to roam and wonder around and dictate their conditions, and try to abort the action of every sincere in the Ummah. Instead they plan for their interests, and are not ashamed of disclosing this.

Isn’t America the architect of the crime of cessation of south Sudan, through its agents; Al-Bashir and his gang in the old regime and the Popular Movement, so why do we see members of the military council, the forces of freedom and change, and others rush to meet the delegations that represent it.

Our People in Sudan:

We in Hizb ut Tahrir / Wilayah of Sudan want to highlight the following:

Until when will the enemy (America and Britain) run our affairs? Until when will their embassies remain the architect of our policies? How long will we be subjugated to the colonial countries that run our affairs through agents who throw themselves in the arms of their delegations?! It is time for us to work hard and serious to raise the banner of the clear Truth by establishing the righteous Khilafah (Caliphate) on the method of Prophethood. Our honest and sincere sons of the armed forces must not be guided by a handful of followers of the colonial West, instead they must support the laws of the Lord of the Worlds and the method of His noble Messenger ﷺ. Hizb ut Tahrir is the carrier of the banner of the call for the righteous Khilafah State on the method of Prophethood – the banner of the Prophet ﷺ – so become its supporters, like how the Ansar were to the Prophet ﷺ, and you will gain the victories of the world and the Hereafter.

“For the like of this let the workers [on earth] work”