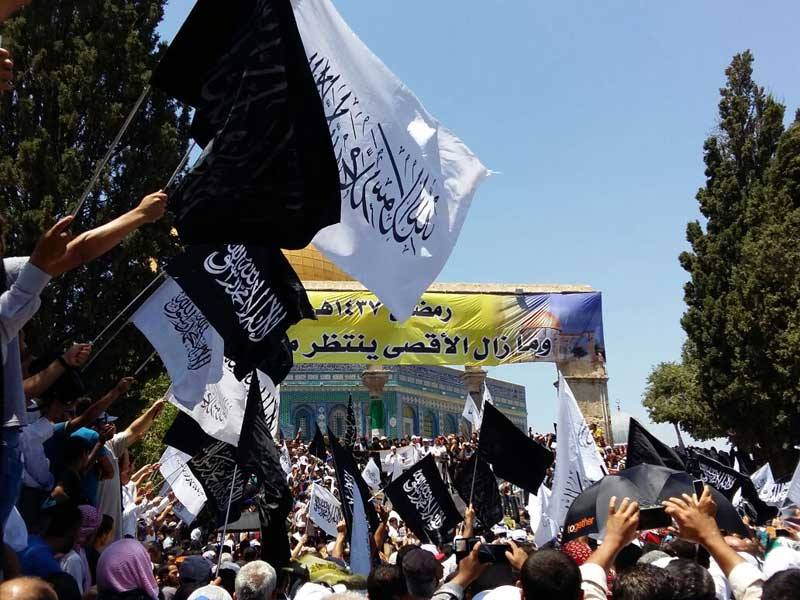 Ramadhan is the blessed month in which the Noble Quran was revealed, according to the Will of Allah (swt), in the Night of Power. It is the truthful Guidance of the Noble Quran that is not for our individual lives alone, but also for our collective life as an Ummah, for our ruling, economy, judiciary, education, relations between men and women, media and foreign policy. Allah (swt) said,

“Indeed, We have revealed upon you (O Muhammad ﷺ) a Book in Truth, to rule between the people by all that Allah has shown you.” [Surah an-Nisa’a 4:105].

It was the ruling by our Great Deen in all our affairs that ensured great success in the Dunya, for the thirteen centuries of our Khilafah. Wealth was circulated without being confined to the wealthiest, so that the poor were relieved of their burdens. The cries of the oppressed were heard and responded to, whilst the enemies’ armies feared facing the Khilafah’s armed forces on the battlefield. Indeed, it was because of ruling by our great Deen, that Ramadhan itself was the month of victory after victory.

However, this Ramadhan, how do we find ourselves, since the destruction of our Khilafah in 1924, corresponding to 1342 AH? How do we find ourselves when in place of our Khilafah, we have rulers over us who do not rule by all that Allah (swt) has revealed? How, O Muslims?! Despite having large, capable and willing armed forces, victory seems to be only for our enemies, who hoist their flags of Kufr over the bloodied bodies of our children, women and elderly. And despite having vast lands, large youthful work forces and abundant material resources, we are drowned in poverty, with our backs broken by hardship. Indeed, without Islam as a state and ruling, our miserable situation is as Allah (swt) warned us. Allah (swt) said,

“And whoever turns away from My remembrance – indeed, he will have a miserable life.” [Surah Ta-Ha 20: 124]

Indeed, this Ramadhan, we will neither find any relief in our miserable situation, whilst we have rulers that do not rule us in strict accordance with the Quran and the Sunnah. This is why the PTI project has failed to bring real change, just like the PPP and PML-N before it. This is also why, cabinet reshuffling and movement towards a presidential system will also fail to bring real change, whether now, in two years, five years or even ten!

Certainly, we will not find any relief from our miserable situation, as long as we are burdened by rulers who ignore that Allah (swt) said,

“They say that Riba is a form of trade. But Allah has permitted trade and forbidden Riba (Interest).” [Surah Al-Baqarah 2:275]. Such rulers are an affliction, who continuously take the forbidden Riba (interest) based loans, both domestically and from the nations of the East and the West, presenting it all as if it were a great achievement. They have dug us deep into the pit of debt, such that a third of our budget is spent on interest based debt servicing, in the order of trillions of Rupees.

Certainly, we will not escape from our hardship as long as those who rule upon us ignore that RasulAllah ﷺ said,

“The Muslims are partners in three things, waters, feeding pastures and fire (energy).” (Ahmad). In our Great Deen, energy, whether it is electricity, gas or petrol, is a public property, which is supervised by the state to ensure its entire benefit is for all the people. However, the sinful rulers have privatized our energy resources, so that we pay through our noses to secure profits for a small minority that owns these resources. In addition to continuously raising tariffs, these rulers give private owners of electricity generation plants “capacity payments,” in the order of hundreds of billions of rupees per year, even if they do not produce electricity!

Certainly, we will not see real change as long as those who rule upon us ignore that RasulAllah ﷺ said,

“Whomever we appointed in his job and we provided him (some funds), so whatever he took unduly would be ghalool (misappropriation).” (Abu Dawud). In the Deen of Truth, any excessive increase in the personal wealth of the rulers during ruling is simply taken by the judiciary of the Khilafah and put in the state treasury, swiftly and easily. However, under the current rulers, the judiciary spends years on such cases, chasing paper trails, whilst the corrupt jump through loop holes, so that some of them keep billions of dollars of usurped wealth firmly in their grip!

And certainly we will not see the liberation of our occupied lands, whilst we have rulers that ignore that Allah (swt) said,

“Those who take disbelievers for allies instead of believers, do they seek power with them? Verily, then to Allah belongs all power.” [Surah an-Nisa’a 4:139]. Such disobedient rulers rush to make alliances, pacts and treaties with the very disbelieving states that fight us, slaughter us and occupy our lands. As for the unification of our lands to strengthen us before our enemies, as one state, with one treasury and with one armed forces, it is not even a consideration for the sinful rulers, let alone a sincere effort!

O Muslims of Pakistan and their Armed Forces in Particular!

In Ramadhan, the month of Revelation of the Noble Quran, let us all firmly commit to restoring the ruling by all that Allah (swt) has revealed. Let us all engage in the work for real change, which will only come through the re-establishment of the Khilafah (Caliphate) on the Method of Prophethood. Indeed, it is Hizb ut Tahrir that has prepared an entire constitution of 191 articles for our Khilafah, accompanied with divine evidences from the Quran and Sunnah. It has prepared a library of books elaborating upon Islam’s political solutions and its method of implementation. And it has produced legions of capable, aware and committed men and women throughout the Muslim World, prepared to advise and account the rulers of the Khilafah.

So, this Ramadhan, let us fully support the advocates of the Khilafah, let us study with them, learn from them and be led by them, so that we add our full weight to the Khilafah movement in Pakistan. And let our sons, brothers and fathers in the armed forces bring real change by giving their Nussrah (Material Support) to Hizb ut Tahrir, installing it into practical ruling, so that we are finally ruled by all that Allah (swt) has revealed. Ahmed narrated that RasulAllah ﷺ said,