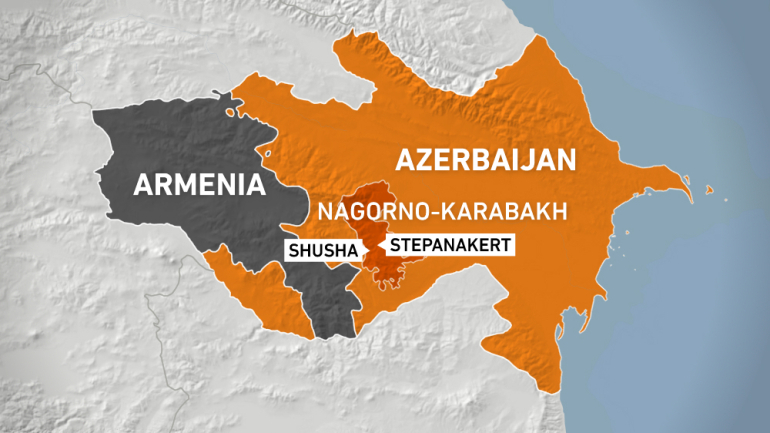 The signing of a Moscow-brokered peace treaty a couple of weeks ago by both the Azeri and Armenian government marked the end of the six-week conflict of Nagorno-Karabakh, and it received a mixed response from its local population and the global audience. As around 2,000 Russian peacekeepers troop into the formerly disputed region to enforce the said treaty, celebrations and jubilee engulfed the Muslim-majority Azerbaijan, whilst many dissatisfied Armenians demonstrated their dissent and discontent at the capital, briefly occupying government buildings. Though it seems as if the triumph belongs to the victorious Azeri Muslims, the real triumph belongs elsewhere, as evidenced by the statement by an adviser to US president-elect Joe Biden, Michael Carpenter, who described the ceasefire deal as a geopolitical victory for Russian president, Vladimir Putin. As such, a question arises, to whom does this victory belong, and what does it mean to the Muslim world?

First, it is essential for us to understand what the Nagorno-Karabakh conflict is really about. It all began when the Soviet Union collapsed, giving birth to the modern countries we know that make up most of Eastern Europe. Among these many Soviet blocs, two of them, Armenia and Azerbaijan, were formed between the Caspian and the Black Sea. As both struggled to survive on their own, albeit Russian dominance looming over them; literally speaking with Russian territory just north of them and in the form of the Moscow Pact; unclear geographical settlements with regards to the region of Nagorno-Karabakh has led to a war between either country in 1991. The first war lasted for four years, killing an estimated 30,000 people and forcing many more from their homes, which concluded with de facto declaration of Republic of Artsakh, under the control of ethnic Armenian forces backed by the Armenian government. Up until this year, small skirmishes would erupt every two years or so as either country continues to dispute the border and try to achieve dominance over the region.

The reason behind such a conflict is not religious; as propagated by the Azeri government, in which Islamic sentiments behind the conflict has been reported as widely exaggerated; instead it is purely economic and geopolitical. Nagorno-Karabakh hosts a very important gas and oil pipeline through which 5% of the total European gas and oil supply comes from; it is not at all a surprise that either nation is willing to sacrifice their people to control such a major artery to European hydrocarbon supply. Other than that, the region also boasts incredibly fertile lands, adding more to its valuable status.

As of the conflict in 2020, it became even more complicated, geopolitically, as other nations in the region decided to take part; namely, Turkey and Russia, in a struggle of geopolitical importance; as the victor of the conflict will emerge dominant in the region, and both Turkey and Russia are ambitious to exploit it. Turkey, under current president Recep Tayyip Erdogan, is keen to expand her political ambitions in Europe, under the guise of Islamic propagation to attract or at least appease the Turkish people.  Erdogan, after his successful attempt to officiate Hagia Sophia as a mosque, and fresh from a domestic political victory, saw Nagorno-Karabakh as an opportunity to establish dominance in the Caucasus region over the Russian administration, and thus allied herself with Azerbaijan, again, under the guise of Islamic propagation. Russia, who is traditionally allied to the Christian-majority Armenia; though some sources indicate that she has had several arms dealings with Azerbaijan; declared her intent in supporting her ally in a proxy war against Turkey.

The first few weeks of the conflict were bloody indeed; casualties, both military and civilian, mounted on both sides, as Turkey poured more mercenary troops recruited from the Turkish-backed Syrian rebels residing in Idlib, the final rebel stronghold. As had happened in both Syria and Libya, Nagorno-Karabakh threatens to be the third theatre of proxy war between a Turkish-backed army against a Russian-sponsored military force. There were even initial fears that the conflict may shake European politics and threaten to be a disaster as Kosovo had before; French president Emmanuel Macron and German Chancellor Angela Merkel were even called in as brokers for the conflict. The presence of Macron and Merkel was rejected by Erdogan, especially as Macron had started an anti-Islamic political campaign in his country; in a bid to continue receiving support from his people, Erdogan attacks Macron’s views on Muslims, denouncing him and rejecting him as a broker in Nagorno-Karabakh.

As this diplomatic battle ensued, the military situation in the contested region itself was not at all favorable to the Armenians. After winning several victories in the initial weeks; and successfully pillaged an Azeri town in that process, raising Azeri anger; they were pushed back from their positions, resulting in Azeri forces occupying key positions, including a road which cuts through Nagorno-Karabakh leading towards Armenia. The use of military drone has also been attributed to the success of the Azeri forces in the conflict.

As the situation worsened for the Armenians, a consensus (of sorts) was reached between Armenia and Azerbaijan. The treaty, brokered by Russian under Vladimir Putin, gave a substantial cut to Azerbaijan, with a regional corridor named Lachin to be put under Russian control in order to enforce the deal. The treaty marked the end of the conflict, to the outrage of Armenians and the joy of Azeris. Thus, a six-week war ended, and showed Russian success in achieving a consensus.

To Muslims, on a global scale, this may be seen as a victory to the Muslim world, as Azerbaijan won. However, the achievement is also enormously due to the Russian-brokered peace treaty, and this serves as a reminder that Russia is still dominant and supreme in the region, instead of Turkey. To us Muslims, in reality, this is a crushing blow, for though we won the war, it is little and insignificant compared to the gigantic strides Russian made to consolidate her supremacy in the region.

What should grieve us more is that all this was done by the Azeris and the Turks not for the name of Islam; that was only a guise to gain political support for an ambitious endeavor to achieve economic and geopolitical importance. This is evidenced by Erdogan’s visit to Azerbaijan for the victory parade in early December, further cementing the “One Nation, Two States” slogan that has been the rallying call for the Turkish intervention to aid Azerbaijan.

Even though Nagorno-Karabakh is effectively under Azeri control, Turkey still failed to respond to increasing recognition of Israel in the Middle East. We have won, yes; but not for the true cause; and we have won, yes; but nothing is done to cease the oppression on our people elsewhere; in Burma, China, and many other parts of the world. Nagorno-Karabakh is a standing example that as long as Islam is not the true goal, nothing can be done or will be done for our fellow brothers.

To conclude, O Muslims, if we as the people of Islam should continue to stay divided and remain aloof of the sufferings of our brothers and sisters elsewhere; if we as Muslims find geopolitical dominance instead of justice to be of the higher priority; as Muslims we have failed to be. How then, should we settle this problem, along with the many other problems of our people?

There is only ever one solution, the same solution our Messenger and his successors had used; to establish a nation where Islam is the true sovereign law, untainted by submission to materialism and to the sovereignty of another human being. A nation based on the Laws as sent by the Creator found in the Quran and the Sunnah of the Prophet. And with the Caliphate at the helm of the Muslim nations, more and more injustice will be crushed and true justice, dispensed under Divine Law, will flourish.

As regards to the Nagorno-Karabakh conflict specifically, the Caliphate; if it is to stand in the foreseeable future as a sovereign country; will not look at the region for its geopolitical or economic importance; rather, it would seek to protect its people (that is, any Muslims) from oppression of any sorts. The same would be done to any other nations who has oppressed or dishonoured the Muslim world; from France with her anti-Islamic crusade, to China with her Uyghur ‘rehabilitation’ program, to the Burmese regime which massacred many Rohingya Muslims and Israel’s systematic genocide of Palestinians, especially that of in Gaza. The Caliphate will be the aegis to the Ummah as it had done before; and will continue to be to the end of the world. As was mentioned by the Prophet in a narration by Abu Hurairah, as collected by the Imam Bukhari, the Prophet said,

“The Imam is like a shield whose orders should be obeyed when they (the Muslims) fight, and where they should seek protection. If he enjoins fear of Allah and behaves justly, then he will be rewarded, but if he enjoins otherwise, then it will be a burden (of sin) on him”.