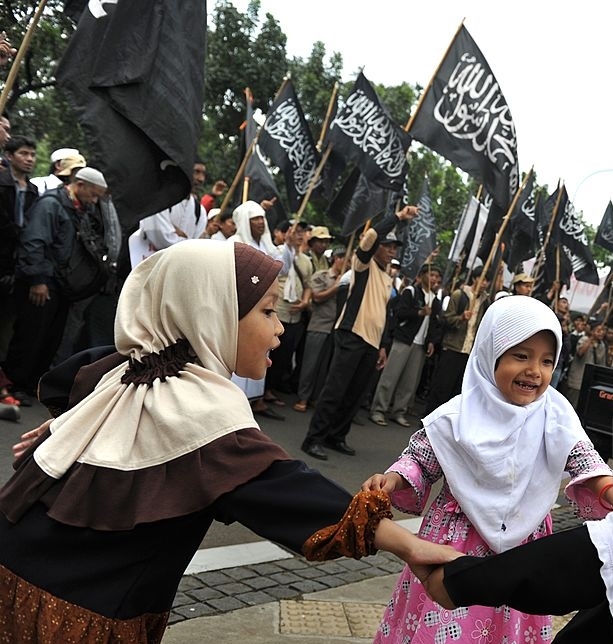 The government’s effort to remove the material of Khilafah (Caliphate) and jihad from Fiqh lessons and move it to be part of history is the effort to reduce the noble teachings of Islam.

Previously, the Director General of Islamic Education from the Ministry of Religion of Indonesia, Komaruddin Amin, explained about the circular letter regarding the subjects about Khilafah and jihad, which are moved under the curriculum of history. This policy is part of the mainstreaming of religious moderation and the prevention of radicalism in the madrasa education unit.

This government policy is clearly against Islam. The reason is that in Islamic teaching, jihad and Khilafah are part of Islamic Fiqh because they are obligations ordered by Islamic Sharia. Khilafah and jihad are not just history lessons. Putting them simply as a part of history without the explanation of the obligation of jihad fi sabilillah (for the sake of Allah) and establishing the Khilafah is an effort to reduce the teachings of the noble Islam.

Regarding the obligation of jihad, Allah (swt) emphasizes in the Qur’an, among others, the verse:

According to Sharia, jihad means war (qital) in the path of Allah. In addition to some verses of the Qur’an, jihad in the meaning of war in the path of Allah, among others, is stated in the sayings of the Prophet, peace be upon him, as Anas bin Malik said:

“Fight the disbelievers (polytheists) with your property, yourselves and your tongues.” [Abu Dawud, an-Nasa’i and Ahmad].

Likewise, the enforcement of the Khilafah is an obligation commanded by Islamic Sharia. Regarding the obligation to appoint a Caliph, Imam an-Nawawi in his book Sharh Sahih, Muslim wrote:

“And they (the Muslims) agreed that in fact it is obligatory for the Muslims to appoint a Caliph, and the obligation (to appoint the caliph) is determined by sharia not by reasoning.”

O Muslims, the efforts to reduce the material of jihad and the Khilafah from the madrasa curriculum, even worse to eliminate it is a real forbidden act. This is clearly an unlawful act because it includes the prohibition of Kitmân al-‘ilm, as stated in the Qur’an and as-Sunnah. The command to convey and explain the teachings of Islam is obligatory. This obligation is reinforced by the prohibition to hide the Islamic teachings, accompanied by threats with the curse of Allah, and the curse of all His creatures.

That is why an effort to hide the Islamic teachings, either by reducing it or even erasing them so to hide them from people is forbidden. Whatever the reason. Whoever does it, will be cursed by Allah (swt). Allah (swt) says:

“Indeed, those who hide (clear) information and guidance that We have sent down, after We explain it to humans in the Book, they are cursed by Allah and also cursed by all beings who can curse.” [al -Baqarah: 159].

O Muslims, we must not be silent about this heinous and unjust policy. Obviously, this is part of the effort to keep the Ummah away from the noble Islamic Sharia. This happens at a time when the US and the West continue to launch relentless onslaught against the Ummah, from Afghanistan and Iraq yesterday, to Kashmir, Syria, Myanmar, India, and China today, forcing their own man-made secular laws upon the Muslims. In this context, the scholars, who are the inheritors of the Prophet ﷺ, are not only forbidden from keeping silent when there is an effort to reduce or undermine the teachings of Islam, rather they are obliged to enjoin the good and forbid the evil, and to say the truth, including the teachings of jihad and the Khilafah. The Messenger of Allah ﷺ said,

“By Him in Whose Hand my life is, you either enjoin good and forbid evil, or Allah will certainly soon send His punishment to you. Then you will make supplication and it will not be accepted.” [At-Tirmithi]

All Muslims must speak out, and act against the unjust policy and endanger the Muslims. Not only that, Muslims must fight together for complete implementation of Islamic Sharia in this Muslim land by upholding the Islamic Khilafah on the method of the Prophethood. This is something that will bring real prosperity to the nation and liberate the Muslims from all the evils that have come upon them.