Q&A: What is the purpose of Erdogan’s visit to Iran?

Answer to the Question

What is the purpose of Erdogan’s visit to Iran? 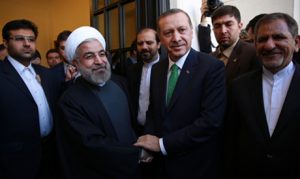 On January 28 and 29, 2014 the Turkish Prime Minister Recep Tayyip Erdogan visited Iran. The Middle East Newspaper quoted on 30/01/2014 a source close to Prime Minister Erdogan saying, “The U.S. Treasury Under Secretary for Terrorism and Financial Intelligence, David Cohen, visited Erdogan on the eve of his departure to Tehran the day before yesterday (28/1/2014). The source added that “the Syrian file was a central theme in the visit.” The Ministry of Economy of Turkey announced that the preferential trade agreement is signed between Turkey and Iran on the sidelines of the visit of Prime Minister Erdogan to Iran. (Yeni Safak Turkish 31/1/2014).

The question is:  The emphasis from the visit is the preferential trade agreement as well as the Syrian file … Is the intent of the visit the commercial factor or the Syrian file or both? And what is America’s role in it? Jazak Allah Khair.

“This [Qur’an] is notification for the people that they may be warned thereby” [Ibrahim: 52]